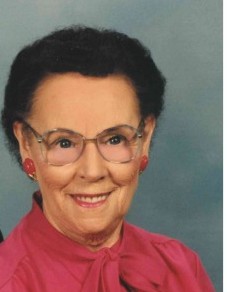 Alogene Henderson, 95, Overland Park, passed away Tuesday July 28, 2020.  Alogene was born June 3, 1925 in Konawa, Oklahoma to Dwight T. Walker and Maude O. (Pullin) Walker.   Alogene grew up in Konawa and graduated from high school there.   She was a “Rosie the Riveter” during World War II and then went on to work for the IRS for many years before she retired.  She was a member of the Eastern Star and Nall Avenue Baptist Church.   Alogene enjoyed gardening and loved everyone.  She never met a stranger and never let anyone leave hungry whenever they came over to their home.  She was loved by all who had the privilege of meeting and knowing her.     She was preceded in death by her husband of 73 years, Ed Henderson in 2018 and a daughter, Colleen Henderson.   She is survived by two daughters: Vicki Henderson and Sharon Rawson; two granddaughters: Blair W. Rawson and Sadie K. Rawson.   Memorial contributions are suggested in memory of Alogene to the Alzheimer’s Association.

To order memorial trees or send flowers to the family in memory of Alogene Henderson, please visit our flower store.