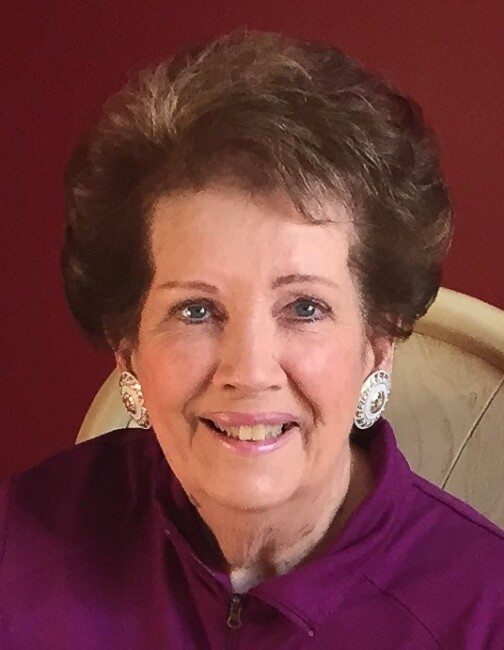 Betty Lou Delfosse went to Glory on March 16th, 2022, in her home surrounded by her family and pups.

She was born August 14th, 1931 to Jack and Wiltrude Dean in Sarasota, FL and grew up in Savannah, GA, and Jacksonville, FL. At the age of 8, she felt something missing in her life and decided to take her and her little brother Jack to Riverside Baptist Church just down the street from their home. That Sunday, she was able to put a name to the presence she had felt her whole life protecting her, Jesus. Betty wanted to be defined by God, not this world, and devoted herself to show Christ's love to everyone she met from that day forward.

Betty attended Andrew Jackson High school, and while in high school, she met her husband, James Edward Delfosse, of 71 years. Betty's best friend Joyce asked her to come along and meet this new guy in town, Jim. He had been recently stationed at the Naval Air Station in Jacksonville, FL, and a buddy suggested he come out to Teen Town, a popular hangout in Jacksonville at the time. Both were hesitant to go but leaped anyways. Jim knew from the moment they met she was the one for him, though it took some convincing on his part for Betty; the rest is history.

Betty and Jim married on March 3rd, 1951, at Lake Forest Baptist Church. They had two children: Deborah Lane (Debbie) and James Edward II (Eddie). Betty was a homemaker who loved being a mom and wife. She gave everything to her family.  Always knowing what they needed and was always willing to give them all of herself. God and her family were the most important things in her life and remained the most important even now in eternity.

While living in Jacksonville with her family, she became the president of the largest Women's Club in Jacksonville, FL. She also sang in the choir at Peeler Memorial Methodist Church. Jim's work moved them to New Orleans, where they spent a year before moving to Cherry Hill, New Jersey, and opening their own dealership, Royal Buick. They won many trips in their time of owning a dealership being able to travel the world. They saw the world together from Hong Kong to Switzerland, Belgium, and the Caymans. In 1973 they eventually moved to open another dealership, Delfosse Pontiac in Kansas City, where they settled and spent the rest of their lives together.

In 1987 their first and only grandchild, Lane, was born. Lane was Betty Lou's real-life baby doll. Betty took an active role in helping raise Lane and was a huge part of Debbie and Lane's life, wanting to be a part of all things, not just the significant events. In June of 1990, she and Jim lost their son Eddie. Betty was by his side till his last breath. Losing Eddie was the most challenging thing she and Jim endured together. Though her faith was tested in the loss of Eddie, she persevered, eventually facing the pain and finding God's light.  She walked alongside others in their loss of a child, helping them find their Faith in God again.

In 1999 the family joined Church of the Resurrection, where Betty became a Stephen's Minister, now known as a Congregational Care Minister. Through her time at Resurrection, she touched many lives and joined the Silver Link ministry, where she would make phone calls to many people who were elderly and shut ins. Many times, Betty was the only person they would talk to that entire week. She would visit nursing homes, read her book of poems, and gift them to residents to brighten their day.

In 2010 she was diagnosed with Alzheimer's. Like all the other obstacles she faced in her life, she kept her faith and gave it to God. Betty wanted to help others in the future with this horrific disease that robs individuals and families and insisted on being a part of Kansas University Alzheimer's Disease Research Center. She actively participated in many studies and wanted to donate her brain after death to the program and her body to the KU Med School to help future doctors become the best they can be. Betty always looked on the bright side and was deeply thankful her family would walk hand in hand through it all with her.

She slowed down as the disease progressed but still stayed joyful and active. Jim and Betty would play cards and enjoyed watching Royals Baseball and listening to music. Betty would Join Lane at work and bring her infectious smile to meetings and events. She would play with her pups Buddy, Billie Jean, and Bo Jangles and even slip them food when she thought no one was looking. She enjoyed having friends over for dinner and visits and would always say, "I just love this kind of carrying on!" She enjoyed helping Debbie in the kitchen and was always eager to help out around the house.

The family would take many road trips across the country, and though she would have some anxiety leaving home, she was always ready to be the co-captain as long as her pups were with her. During her last year, Jim, Debbie, and Lane planned two road trips, one to Door County, WI, and the other to Wyoming, visiting the Grand Tetons and Yellowstone National Park in the fall. Betty would say, "Look at God's most excellent artwork He willingly gives us" on both trips.

Betty's life will be celebrated on Saturday, March 26th, 2022, at the United Methodist Church of the Resurrection Wesley Chapel, Building C, 13720 Roe Ave., Leawood, KS.  A visitation will be held from 12:00 -1:00 pm. and a Memorial Service and Celebration of Life will be at 1:00 pm with a reception immediately following.

In lieu of flowers, the family and Betty requests donations made to either Kansas University Alzheimer's Disease Research Center or Cross Roads Hospice, who provided beautiful and loving care for her and her family the last month of her life.

To order memorial trees or send flowers to the family in memory of Betty Lou Delfosse, please visit our flower store.

The United Methodist Church of the Resurrection, Student Center