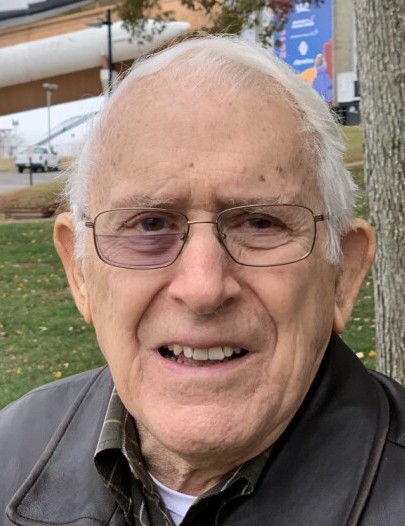 Burton “Butch” Gordon was born November 2nd, 1928, to Clyde and Juanita Gordon. Clyde and Juanita had two children, Burton and his older sister Betty who preceded him in death.  While he was born in Watonga, Oklahoma, the family soon moved to Salina, Kansas and then on to Manhattan, Kansas, where he attended grade school, high school, and then graduated from Kansas State University.

After graduation, Butch moved to Tulsa, Oklahoma, where he worked in the accounting department for Standard Oil. Then, in 1952, Butch married the love of his life Shirley Wills. Shortly after marrying, the two set off for Wyoming, where Standard Oil transferred Butch. Wyoming was short lived, as the couple headed to New Delhi, India to work for the U.S Foreign Service with their two young children, Mark and Dan, in tow. In 1959, the family moved back to Kansas City where Butch started work for what would become known as the Federal Highway Administration, and a third child, Bill, was born. One short stop in Iowa later and the family moved to Juneau, Alaska. There, Butch and Shirley had a fourth child, a daughter, Karen. 1968, saw another move, as the family headed to Fairfax, Virginia and Butch worked in Washington D.C. In 1972 the family made their final move to Kansas City where he finished his career and retired in 1989. Butch continued to reside in Kansas City until his passing.

Butch had a passion for wood working, fishing, playing pool and bridge. None of these, however, came close to the love Butch had for his family.  Forever an amazing example of grace and kindness, this was never more evident than after Shirley’s diagnosis with Alzheimer’s. Shirley lost her battle in 2007. Butch never left her side, caring for her daily and tucking her into bed every night.

Anyone to ever meet Butch always heard of how proud he was of his family.  While we will always miss him, his legacy lives on in his family. He lived a wonderful life filled with love, and his family has peace knowing he is in the hands of his Lord and Savior.

In lieu of flowers, donations can be made to Alzheimer’s Foundation of America, Knox Presbyterian Church, or Aberdeen Village.

To order memorial trees or send flowers to the family in memory of Burton Butch Gordon, please visit our flower store.