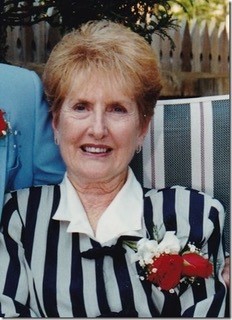 Corliss passed from this world peacefully on November 20, 2020. She was born Corliss Neoma Ferguson on November 20, 1925 in Louisville, Kentucky to parents, Dewey Comer Ferguson and Tampa Pearl Maupin. Her parents moved her and her two siblings to a farm out of the city during the Depression where she thrived surrounded by aunts and uncles, grandparents and cousins.  She married Charles Casper “Cass” Hayden on June 26, 1948.  They moved to Kansas City, Missouri he completed his pharmacy education.  For a short time, she helped with the pharmacy he owned.  They bought a home in Overland Park, Kansas and raised a very noisy household of 4 boys.  Corliss also had a daughter that died at childbirth.  She was very active with her young boys in the Boy Scouts and in the church while they were growing up.  Corliss enjoyed the family camping vacations and spending time on their houseboat.  She and “Cass” loved traveling abroad.   She worked for a time at Montgomery Ward’s Credit Services before returning home to be primary caretaker for her son, Gary, who was living at home with Multiple Sclerosis.  Gary passed away May 9, 1988.  Always an outgoing personality, Corliss had many friends.  Her husband died suddenly in 1983.  A few years later, she met Dallas Lasater.  They married on December 30, 1987, did some traveling abroad but mostly enjoyed their time at the lake house and on the water, fishing and swimming.  Dallas passed away Christmas Day 2012.  She leaves behind three sons: Charles Michael Hayden (married to Pamela Hayden), Dennis Eugene Hayden, and David Kevin Hayden (married to Mary Ann Hayden), as well as 7 grandchildren, 11 great grandchildren and 2 great-great grandchildren. She will be greatly missed by all.

To order memorial trees or send flowers to the family in memory of Corliss Hayden, please visit our flower store.