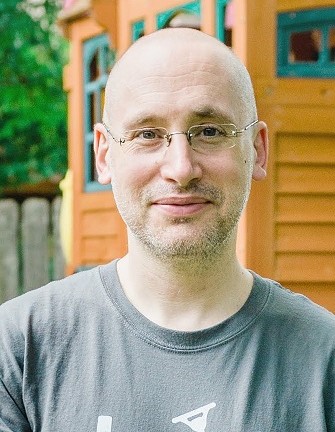 David Burkhardt, 43, of Lenexa, Kansas, passed away September 17, 2020 from a tragic motorcycle accident.

He lived his life to the fullest, making friends everywhere he went. David knew no strangers and was always delighted to strike up a conversation. He had an unquenchable thirst for knowledge and thrived at exploring new hobbies. He enjoyed playing the drums and sound mixing, even being named in the liner notes once for helping to produce a friend's album. He was quite mechanically inclined, assembling a motorcycle from the ground up in his parent's basement using a kit that was missing assembly instructions (including those for the engine and transmission) and most recently taking on a project to rebuild a Corvette with a close friend. He completed countless home renovation projects with the ease of a professional, both on his own home as well as helping friends.

David made complex issues look easy and was always willing to meet you at your level to teach you what he knew. He gave 110% in everything he did, from cleaning up a spill on the floor (hands and knees were almost always required), to single-handedly creating an intranet for Disney at a young age. He may have lived in Kansas, but his roots were in Chicago. He took such joy in talking about where he grew up and the beloved family and friends he had there.

David will be lovingly remembered by his wife Nichole and his 3 young sons, Max, Jameson, and William, who idolize him. He is also survived by his parents Mark and Debbie Feldman; his brother Don Burkhardt (Kelly); his nieces and nephew Sarah, Nicholas, and Peyton; his grandmother Charlene Smoy; his Uncle Ron and Aunt Gail Smoy; cousins Jason and Erik Smoy; and countless extended family members.

To order memorial trees or send flowers to the family in memory of David Burkhardt, please visit our flower store.