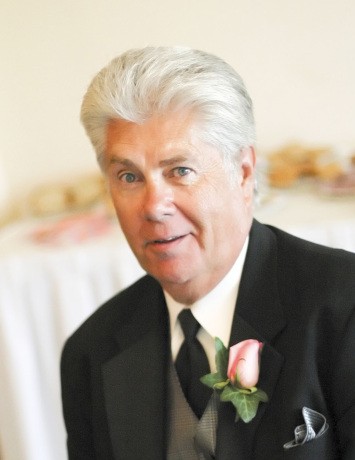 He b egan working at age 12 at Dale’s Hardware in Overland Park, Kansas, where he honed the work ethic that eventually lead him to open his recruiting firm National Personnel Consultants in 1967. He graduated from Shawnee Mission High School in 1952 and attended University of Kansas for 1 year.

Met his beautiful wife Sylvia Bates on a blind date in Westport, and married her just five months later on May 29, 1976.

Dennis Loved Jazz music, especially Count Basie and Gene Harris.  He was a diehard KU Jayhawks and Kansas City Chiefs fan.  He was always quick to engage in a conversation about politics or the current state of news around the world and in Kansas City.  His brothers, sister, and their families called him Denny and to his close friends he was Dino.  Dennis had a huge personality that could light up a room just by walking in.

At age 53, he suffered a massive heart attack that led to a heart transplant at St. Luke’s Hospital on the Plaza.  Dennis was the first person at St. Luke’s to receive a heart transplant without knowing he was receiving one.  Upon waking up from the surgery and being told that he had had a transplant, he said, “Ok, let’s do it”, only to be surprised when he was told it was already completed.

Dennis lived another 30 years with his new heart and became the oldest surviving heart transplant recipient at St. Luke’s.

To give back for his second chance at life he became a board member at The American Heart Association of Kansas City and was also the most requested speaker of the United Way of Kansas City where he would tell audiences about the four miracles, he experienced during the journey from heart attack to heart transplant.

Dennis was a devoted husband and father and one of his greatest joys in life was when he became a grandfather.  His grandsons called him Papa; he would brag on David and Ryan whenever he had the chance be it to family members or medical staff in the hospital or at care appointments.

His family is forever grateful to the donor of his heart and to their family for giving him an additional 30 years enabling him to witness the numerous milestones of life that he would have missed including walking Shay down the aisle and the birth of his two treasured grandsons.

He is survived by his wife Sylvia; Daughter, Shay, husband Terry Link; Grandchildren David and Ryan.

A gathering of friends and family will be Monday, May 3, 2021 from 1 PM until time of service at 2 PM all at the Johnson County Funeral Chapel and Memorial Gardens.

The family asks in memory and honor of Dennis that you please consider becoming a donor so that you too can give the gift of life and provide a family the same “second chance” opportunities that were given to Dennis’s family and friends.  see the links below for donations in lieu of flowers.

To order memorial trees or send flowers to the family in memory of Dennis Oetting, please visit our flower store.