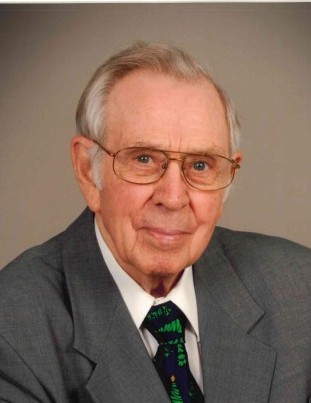 
Dewey was born December 23, 1924 in Bigelow, Kansas, the son of John Dewey (J.D.) and Melissa (Fairchild) Carpenter.  He graduated from High School in Pawnee Rock, KS.  At the age of 18, he enlisted in the service for WWII and was assigned to the Medical Detachment 175th Infantry.  As a medic, he became known as "Doc" for providing aid to wounded soldiers on Omaha Beach in Normandy, Northern France, Rhineland and Central Europe.  After the war Dewey met his wife, Mary Lou, while attending college at Kansas State University.  He graduated  with a degree in Education and taught as the band instructor in Rolla and Meade, KS.  He then switched careers to sales, selling for Meade Manufacturing, before becoming the business owner of the Sears Catalog store in Meade.  He and Mary Lou later relocated to Mission, TX to enjoy retirement, friends and the sunny climate. His most fulfilling role in retirement was directing Bentsen Grove Resort's church choir, planning Sunday anthems and numerous cantatas.


Dewey lived a long, full and meaningful life.  He loved God, his family and his music.  Throughout the years, Dewey made the best of his free time as an artist, craftsman, gardener, golfer, tennis player, master of ping pong, and fan of Nascar racing. His family and friends knew him to be a faithful Christian and church member, encourager, wise sage, and fierce competitor.


A service of remembrance will be held 4:00 p.m. Saturday, September 18, 2021 at Overland Park Church of the Resurrection, 8412 West 95th, Overland Park, KS, officiated by Rev. Joshua Clough. The service will also be live streamed [ www.cor.org/memorialsonline ] Burial will be 1:00 p.m. Sunday, September 19 at the Pawnee Rock, KS Cemetery.


In lieu of flowers, the family suggests donations to the Dementia Society of America, PO Box 600, Doylestown, PA 18901, www.DementiaSociety.org .

To order memorial trees or send flowers to the family in memory of Dewey Carpenter, please visit our flower store.

Church of the Resurrection of Overland Park