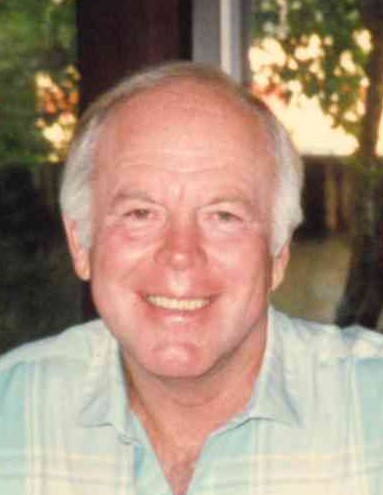 Donald V. Hicks, age 88, of Overland Park, Kansas, died Tuesday, July 27, 2021, at Sunrise of Leawood Senior Living in Leawood, KS. He was visited prior to his death by those he cherished; his wife, his children, his grandchildren, and wonderful friends.  His heart held volumes of gratitude and love for the blessings from his family, his friends, and his Country.

Don was born in Peoria, Illinois, on February 24,1933 to Orville and Verneal Hicks where he attended Woodruff High School.  At a very early age, Don excelled in basketball, baseball and football, a passion he continued and excelled throughout his life.  He graduated Cum Laude from Bradley University in Peoria, Illinois. While at Bradley, he played baseball for the Bradley Braves and led the team in RBI’s. He graduated from the Bradley ROTC Air Force program as an officer and reported for duty in 1956 as 2nd Lieutenant at Lackland AFB in San Antonio, TX.  His military service continued at Lowry AFB in Denver, CO where in addition to his duties with the firing control systems for fighter aircraft, he played on the base’s baseball team where he was named to the Air Force All Star Team after leading the team to the Colorado state title collecting 14 hits including five home runs. In the worldwide Tournament, he had a .482 batting average. At the Colorado semi-pro tournament, he was named the Most Valuable player after batting .565 and set a tournament record with three home runs in a single game and seven in seven games.

He was named 1957 Sportsman of the Year for the Technical Training Air Force after providing leadership in basketball, baseball, softball, touch football, volleyball and two bowling teams. He was active off the base serving as a coach and referee for high school teams in Aurora and Denver. One of his biggest off-base achievements was coaching the 1963 Colorado Little League Champion Team.

After his promotion to Captain, Don was assigned to the Air Force football coaching staff where he worked closely with Lt. Colonel Felix “Doc” Blanchard recruiting athletes for the Academy. He was an articulate speaker at high school functions and was recognized for his efforts on behalf of the Air Force and its Academy by Presidents Harry Truman and John F. Kennedy.

After leaving the Air Force, Don focused on his businesses, but never left sports. He played with a softball team, “Sixty,” helping them win the Senior Softball AAA Division in 1995 and was a member of the Kansas City “Ageless Wonders” National Senior Softball Champions. He was made an “Honorary Citizen” by the City of Kansas City, Missouri.

He is survived by his wife of 42 years Susan Hicks; his children Cheli Hull (Jess) of Omaha, NE, Lori Flynn (Mike) of Minneapolis, MN, Brad Hicks, their mother Sharon Graybow, his step-children Scott Christlieb, Tammy Quinn and Tracy Christlieb all of Kansas City; his grandchildren Jessie Lickteig, Anna Lickteig and Nicole Lickteig.  They called him “Poppy” which he loved!

Don was a successful businessman and entrepreneur and founded many successful sales operations. He was also active in land development in Kansas, Missouri and Florida and was a savvy investor. He is best remembered for his love of sports and his numerous athletic achievements.  An avid Kansas City sports fan, he rarely missed his beloved Jayhawks, Royals and Chiefs play ball. He was a collector of all things, antiques, sports collectables, marbles, coins, you name it, he collected it.

Off the athletic fields and floors, Don had an engaging and charming personality and a quick smile. He loved his wife, his children, grandchildren, and friends, including many in his hometown of Peoria and Marco Island where he and Susan spent 12 weeks every year, who loved and missed his sense of humor and his familiar laugh.

A memorial service and reception will be held at 2pm on Thursday, August 5th at Johnson County Funeral Chapel, 12200 Metcalf Ave, Overland Park, KS.  Visitation will be held at 1pm.  In lieu of flowers, contributions can be made to the National Senior Games Association or the Wounded Warrior Project.

To order memorial trees or send flowers to the family in memory of Donald Hicks, please visit our flower store.