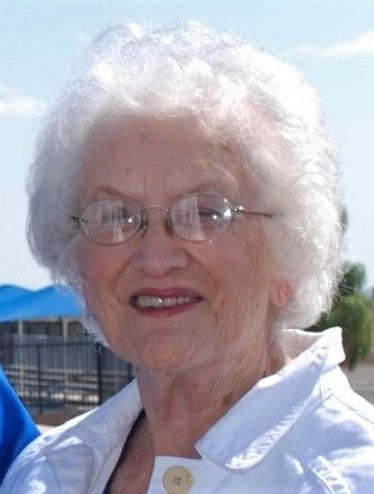 Doris Louise Squibbs was born to F.W. and Doris McQuigg in Schaller, Iowa on September 12, 1932. She passed away peacefully on September 10, 2021, just two days short of her 89th birthday. She went to country school for eight years and graduated from Schaller High School in 1949, and was Salutatorian of her class. She participated in many of the activities the small school offered—plays, musicals and was especially good on the girls’ basketball team. She had a deadly long shot!

She continued her education at Iowa State Teachers College and received a two-year teaching certificate. Doris taught second grade in Milford, Iowa for three years. She then went to the University of Colorado, where she completed her junior year. While in Denver, she worked at the MAY D&F department store, and was an associate buyer until 1958. Then, she and a friend moved to Kansas City and she worked at AT&T Headquarters.

Doris, or Dottie as many friends call her, met Jerry Squibbs one Sunday morning on her front porch. He was visiting his friends, her downstairs neighbors. Their friendship sparked when they started discussing baseball. They went to a game together that day, and That was That!

Jerry and Dottie were married in Columbia, Missouri on September 3, 1960. They lived in Columbia for a year while Jerry completed his mechanical engineering degree and she worked at State Farm Insurance Company. He accepted a position with Natkin Company in Kansas City and Dottie went back to work for AT&T. They soon bought a house, and that is when she quit AT&T to stay at home. She enjoyed homemaking and entertaining her family and friends.

They welcomed their son, David in January 1971, and she loved being a mother and a wife. They all enjoyed traveling together, and Hawaii was a favorite location. They enjoyed trips to their special place on Lake Viking, and usually anywhere around water. They enjoyed their back yard pool and many times their home was the center of family holidays. Doris found a place for her talents by volunteering at Asbury United Methodist Church. She especially enjoyed her work with United Methodist Women and her positions on various boards and committees. She was an active member of Johnson County Young Matrons, and participated in helping establish TLC.

Jerry died far too early, in 1992. They had moved to Denver for his big promotion within his company, but when his heart was failing, they came back to Kansas City. Jerry passed away following his heart transplant surgery. Doris and her son David continued to live in Overland Park.

Her extended family was important to her, and she continued hosting holiday and family events. In 1999, she opened her home to her sister Ruth McQuigg. They together maintained their home and traditions. They traveled together, especially in the winter, to favorite spots like Charleston, South Carolina, Arizona, Gulf Shores and of course, Costa Rica to visit David. They moved from their Overland Park home to Brookdale Retirement Community in November of 2018. Doris lived her last few months at Villa St Francis.

Dottie will be remembered as a kind, generous lady—ready to talk sports with anyone who would listen. She and Jerry loved the Chiefs and Dottie studied the newspaper and knew many facts about both her beloved Chiefs and Royals. If you had a different opinion on a subject about sports, you probably were never going to win an argument with her.

Doris was preceded in death by Jerry, her parents, brothers Jim and Bruce, and sister Margaret. She is survived by her son, David, her sister, Ruth, and her sisters-in-law Suzanne Gehring and Peggy Squibbs. Her survivors also include numerous nieces and nephews, and a great many friends.

To order memorial trees or send flowers to the family in memory of Doris Squibbs, please visit our flower store.