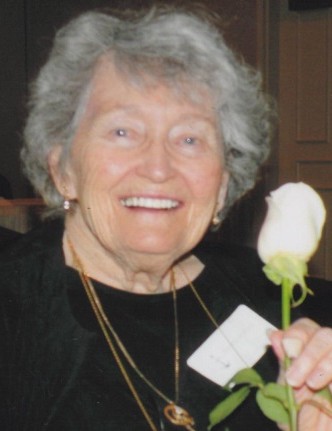 Dorothy D. Mulford, 98, died in her home in Leawood, KS, on May 23, 2021. Born in Council Grove, KS, she moved to Pampa, Texas with her parents, Newt and Marguerite Dilley, where her father opened a bakery during the oil boom. Needing efficient shipping as the bakery business grew, they moved to Kansas City. She graduated from Southwest HS at 15, attended Bradford and University of Kansas before graduating cum laude from the University of Texas. Texas always rivaled Kansas and Colorado for a place in her heart. Two events occurred during her Jr. year at TU that affected the rest of her life: the bombing of Pearl Harbor and joining the Delta Gamma sorority.

After WWII began, Dorothy felt the call to serve. She enlisted in the WAVES, expecting to be far from home. She was stationed at the Naval Air Station base in Olathe, KS (!), and worked in flight control. She earned her private pilot license on a Piper Cub. She met her future husband, Lynn, on a blind date two weeks before he shipped overseas as a troop carrier pilot in the European theater of war. One week after his return three years later, they were married on Valentine’s Day, 1946. He was the love of her life until his death in 2012.

The Delta Gamma sorority gave her lifelong friendships, including the Silver Streakers group she started for members of 50+ years.

Dorothy had a zest for life and adventure and an inquiring mind. She was avid and skilled at needlepoint, knitting, and even Navajo rug making. She admired the SW Indian cultures and loved their turquoise jewelry. Her passion was ice hockey. She was a season-ticket holder from the moment ice hockey arrived in KC in the mid 1970’s. Being honored to ride the Zamboni between periods was a highlight. Her other activities included being an original member of the Colonial Congregational Church in Prairie Village, KS, and teaching Weight Watcher classes for 15 years. She studied with the Cockefair Chair at UMKC, and was friends with Carolyn Benton Cockefair. Dorothy and Lynn spent as much time as they could at their beloved family log cabin (Itsa Dilley Cabin) in Lake City, CO. They loved jeeping on “real roads” in the wild high country of the San Juan mountains.

The center and core of Dorothy’s life was her family. She was predeceased by her husband, Lynn, and her grandchild Michael Mulford. She is survived by her five children: Newton of Lawrence, Daniel of Kansas City, Patton of the U S Virgin Islands, Matthew of Brighton, CO and Emily Mulford Dick of Boulder, and by her 11 grandchildren and 15 great-grandchildren.

In lieu of flowers, donations may be made to Delta Gamma’s charity, Children’s Center for the Visually Impaired; to the Lake City Historical Society in Lake City, CO; or to the Cockefair Chair at UMKC, in her name.

To order memorial trees or send flowers to the family in memory of Dorothy D. Mulford, please visit our flower store.