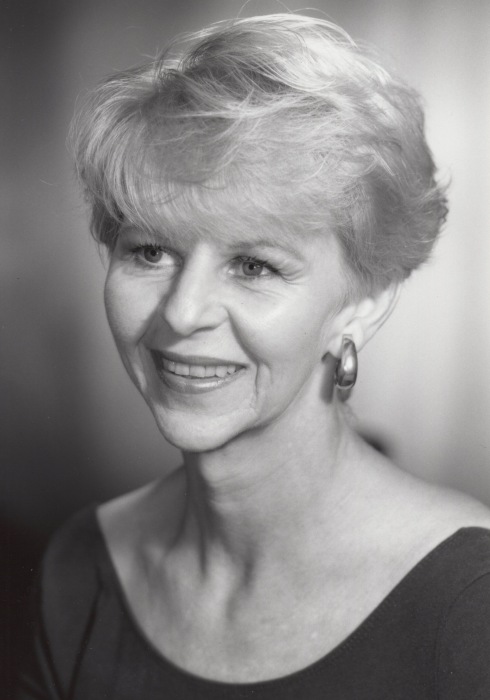 Liz was multifaceted – wife, mother, Master Gardener. She was perhaps best known in Kansas City for her long career in the dance community, as a ballerina in the Kansas City Civic Ballet, (precursor to today’s Kansas City Ballet), as a pioneer in creating dance-outreach programs, and as the founder and artistic director of the Westport Ballet Theatre and School.

She was born February 24, 1937, in Denver, the second child of Benjamin E. and Virginia Lewis Sweet. Educated in Denver, she began ballet there under the tutelage of Lillian Cushing. During high school she first performed professionally in the Central City Opera Summer Festival, and in Cushing’s company with the Denver Symphony Orchestra. While majoring in English at Wellesley College outside Boston she continued her dance training at the New England Conservatory of Music.

Back home on summer vacation in 1956 she met Benjamin F. Hard, then an Air Force doctor serving his internship at Fitzsimmons Army Hospital near Denver, and they married six months later. They divorced in 1979, but during their life together they followed his medical postings, first to Boston, then to Wichita Falls, Texas, and finally to Kansas City in 1963.

At each stop, Liz continued to dance. The Kansas City Civic Ballet was in its seventh season when she joined in 1964, and she became a soloist the following year. In 1967 she gave a pre-performance talk and demonstration at the Kansas City, Kansas, public library, in what was the first of her many efforts to demystify ballet for a broader audience, including students in area schools.

This became a theme when she left the ballet to open her own school of dance in 1974, taking the name of the redeveloping historic Westport neighborhood where the studio was located. The ballet company came two years later, and presented the first of what would be 21 annual summer performances outdoors in Westport. Later she choreographed three ballets for audiences of schoolchildren – “The Wizard of Oz,” “Hansel and Gretel,” and “Snow White” – that were performed annually in rotation at the Folly Theater. She also created a “Silver Slippers” series of dance performances for senior audiences.

In 1985 she married Michael Simms, then head of the dance department at Stephens College in Columbia. They had met when he choreographed a piece for the company’s summer performance, and their collaborations continued during many memorable years together, including teaching together at the School of the Westport Ballet. Liz spoke to a reporter when the performing company ended its run at the end of 1997. “On New Year’s Eve, Michael and I are planning to dress up, open a bottle of champagne, light a candle and have a last dance around the ballroom,” she said.

He survives, as do daughter Susan and her husband, John Simonson, and son, Ben, all of Kansas City. Other survivors include nephew William B. Hobstetter and his wife, Judy, of Littleton, Colorado, and their children, Laura and Ben; sisters-in-law Nancy Kranzberg of Chicago and Barbara Rea of St. Louis; stepdaughters Lisa Kardel, Jennifer Hyle, and Claudia Riley of St. Louis, and stepson Michael B. Simms of San Francisco.

A memorial celebration of her life will be held at a later date. Memorial contributions can be made to the Grace and Holy Trinity Cathedral or the Juvenile Diabetes Research Foundation .

To order memorial trees or send flowers to the family in memory of Elizabeth Hard-Simms, please visit our flower store.