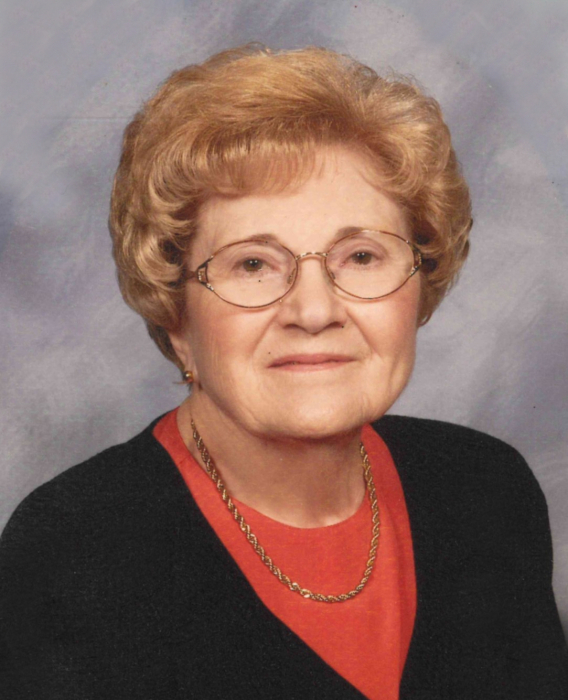 Evelyn (Drebes) Nelson, 98 of Eureka, Kansas (formerly of Overland Park, Kansas) passed away, December 10, 2020 at the Eureka Nursing Center.  She has arrived safely to her Eternal home and will be “Home for Christmas” after living a very blessed and long life.

Evelyn, the daughter of Clyde and Alma (Stigge) Drebes was born on January 9, 1922 in Barnes, Kansas. She graduated in 1940 from Barnes High School. She moved to Washington DC to work at the Pentagon at the time of World War II. It was there that she met Roland O. Nelson and they were married on December 24, 1943 in Rock Island, Illinois at St. John’s Lutheran Church. After Roland’s return from his deployment to Europe during the war, they moved to Denver, Colorado for him to begin employment there. By the time they were relocating to Axtell, Nebraska, they had been blessed with three children ... Jerald, Roger and Sheryl.

After they made their final move to Overland Park, Kansas, Evelyn began working for Pyramid Life Insurance Company in their payroll department. She celebrated 20 years of employment at her retirement.

Evelyn was an active member of Bethany Lutheran Church in Overland Park for over 50 years. She loved to sing and was a member of the choir and belonged to the Lutheran Women’s Missionary League and the Elizabeth Circle women’s group. Evelyn liked to participate in Bible studies whenever she could.

Evelyn and Roland celebrated 49 years of marriage before Roland lost his battle to cancer in 1993. After taking a break following her caregiving role, Evelyn decided to embark down a new path...starting a church library! She loved books and was willing to learn.

Evelyn’s commitment to her faith in Jesus Christ was always shining through. She was known by her family and friends as a mighty and faithful Prayer Warrior.

To order memorial trees or send flowers to the family in memory of Evelyn Nelson, please visit our flower store.