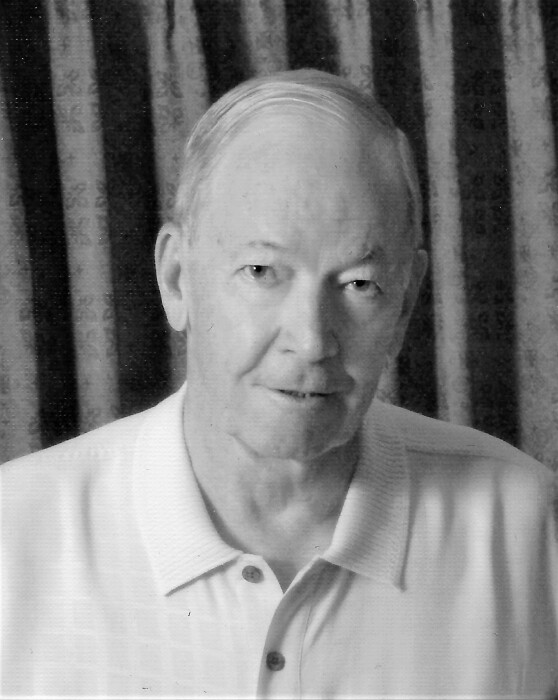 Gene Richard Nelson, of Lenexa, Kansas passed away on Monday August 30, 2021. He was an avid sportsman with a keen intellect and common sense approach to finance and the world. Gene was deeply devoted to caring for his wife and family. He was born February 28, 1927 in Smolan, Kansas to Emil Ferdinand Nelson and Blenda Pehrson Nelson. Gene attended Marion High School where he was on the football, basketball and baseball teams and sang in the glee club. During his childhood in Marion, he enjoyed hunting and fishing with his father and brothers. He and his brother, Wayne would earn money by shooting ducks, packing them into a barrel and sending them to Chicago restaurants. He also learned to play golf and tennis at the Marion Country Club. He enlisted in the Navy in 1945 and served in the Pacific for two years on the Westmoreland. Following the war he attended the University of Kansas where he was a member of the Phi Kappa Psi fraternity and became affectionately known as "Skinny". He graduated with a bachelor's degree in Accounting and became a CPA. His first career job was with the Canteen Company in Kansas City, where he rose to become Treasurer. He later worked with Wolf & Company and then as an independent CPA.

When he moved to Kansas City he met his bride-to-be Betty (Sis) Dunne. They were married on June 12, 1954 and celebrated their 67th anniversary with family this past summer. Gene and Betty lived in Kansas City, MO in their early years and moved to Fairway, KS in 1966, where they remained for 50 years. Gene enjoyed all types of activities with his children, teaching them how to ice skate, build kites and play sports. Gene was an avid sportsman. He was a long time member of Homestead Country Club, where he had a standing doubles game on Wednesday nights for over 30 years. He played tennis and golf into his late eighties only stopping when he could no longer see the golf ball or chase down the drop shot. Gene would relax in the evenings working in his garden, where he grew all kinds of vegetables from asparagus to tomatoes. He would often share his bounty with friends and neighbors. Gene was deeply devoted to his wife and family. He is survived by his wife, Betty (Sis) Dunne Nelson, children, Sally Davenport of Coronado, CA and her husband David Davenport, Richard (Rick) Nelson of Katy, TX and his wife Marife Nelson, Elizabeth (Betsy) Beck and her husband, James Beck and Robert (Bob) Nelson of Raytown, MO. "Granddaddy" leaves behind seven grandchildren: Kate, Charlie and Scott Davenport; Sarah Williford and Jeffrey Nelson; Anna and Ryan Beck; and one great-grandchild: Adam Williford. The service will be a private gathering of family. Rather than flowers, consider a donation to these worthy local charities: KU Endowment - KU Alzheimer's Disease Center: KU Endowment c/o Lindsay Hummer Mail Stop 3012 3901 Rainbow Blvd.Kansas City, KS 66160, Kansas & Western Missouri Salvation Army 3637 Broadway, KANSAS CITY, Missouri 64111 or City Union Mission 1100 E 11th St. Kansas City, MO 64106 Attention: Bookkeeping.

To order memorial trees or send flowers to the family in memory of Gene Nelson, please visit our flower store.