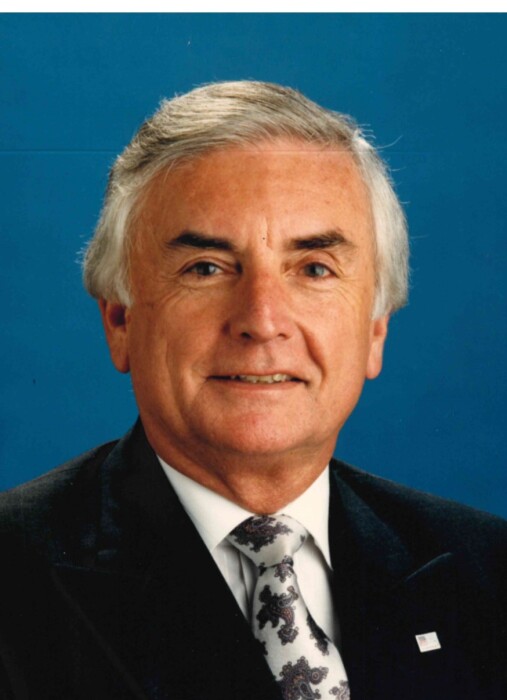 Jerry Loyal Bowman was 91 years old passed away April 25th 2021. Jerry was born June 20th 1929 in Kansas City MO, an only child of Loyal and Neta Bowman. Funeral service will be at Johnson County Funeral Chapel & Cemetery 11200 Metcalf, Overland Park, Ks.  Visitation will be 11am and Service at Noon on Monday May 3rd at the Funeral Home.  Burial will be at Mount Moriah Cemetery 10507 Holmes in Kansas City, Mo.

Jerry was in the Food Brokerage business most of his life. He was Chairman/CEO of Sales Force/Seavey Flarsheim of Kansas City until his retirement in 1990.  He started with Sales Force in 1959 and was promoted to President of the Omaha division in 1966 until he moved back to Kansas City.  Before starting in the Food Brokerage, he worked in several different jobs including working in his parents’ supermarket, meat cutting, selling life insurance and owning an awning business.  He also owned and operated a firework tent in Raytown for several years, purchased Adrian’s BBQ sauce company, and owned B&B Distributor floor care equipment. After retirement, he continued consulting and was involved in many other business adventures.

Jerry was very involved in the community and fundraising programs, served as past President of the Raytown Jaycees and was selected as the Outstanding Young Man by Jaycees in 1962. He was active in the YMCA Indian Guides with his sons and was Chairman of the YMCA fundraising program in 1960.  He was a Master Councilor of DeMolay in 1946 and held the Chevalier Degree in DeMolay.

Jerry served on several boards of various organizations, including role of past President of Oak Hills Country Club of Omaha, past President of the Food Broker Association in both Omaha and Kansas City, and past President of Allied Food Club. Other boards he served on included D-Con Co., U.S. Borax Co., Ragu food, Dow Chemical and American Food. He was actively involved with Muscular Dystrophy telethon.  He supported the Friends of Sacred Structures and The Native Sons and Daughters of Greater Kansas City

Jerry loved to golf and travel.  He found a passion for flying and became a single engine pilot.  He loved football and was one of the original KC Chiefs season ticket holder.  He served as a Kansas City Chiefs Red Coater.  He was also an avid Nebraska Cornhusker football fan.

Anyone that knew Jerry would say he was known for his joy of life, great sense of humor and little streak of orneriness

To order memorial trees or send flowers to the family in memory of Gerald "Jerry" Bowman, please visit our flower store.