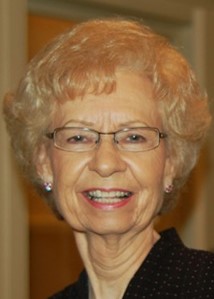 Helen Marie Burbridge, 95, of Overland Park, KS, passed away on October 30, 2022, after living a life blessed with family, community, and many friends.

Helen was born on May 9, 1927, in Osawatomie, KS, to Glen and Clara Alcock. She graduated from Central High School in Kansas City, MO, in 1944. She married Ralph Burbridge on October 9, 1948. Ralph passed away after 66 years of marriage in 2014. Helen worked at TWA for 6 years and then became a full-time mother and housewife. With her family grown, she was active in volunteer work for RSVP of Johnson County and St. Luke’s South Hospital. She was a former member of Overland Park Racquet Club, where she loved the game of tennis. She also enjoyed dancing, traveling, and playing bridge. She and Ralph had a cabin at the Lake of the Ozarks where she loved to fish and entertain (but never got in the water past her knees!).

Memorial contributions can be made to the United Methodist Church of the Resurrection, 13720 Roe, Leawood, KS 66224, or an organization of your choice. A private family service will be held at a later date.

To order memorial trees or send flowers to the family in memory of Helen Burbridge, please visit our flower store.