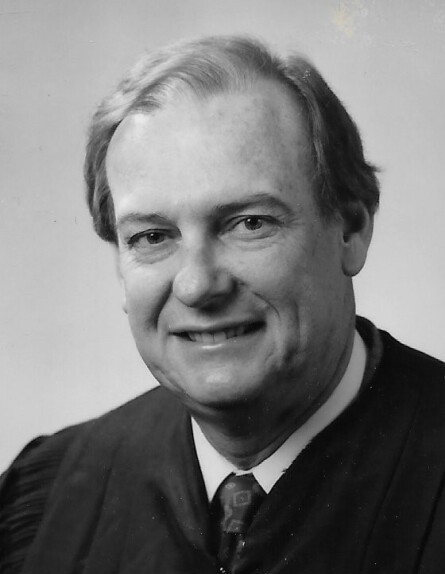 It is with great sadness that we announce the passing of the Honorable John Thomas Flannagan, who died peacefully on September 1st, 2021 in Overland Park, Kansas.  He was 85 years old and lived a full and happy life.  John was born November 22, 1935 in Fremont, Nebraska to John Joseph and Virginia Mae Flannagan.  He grew up in Arizona and then Scott City, KS, where he was a high school sports star. Receiving football scholarship offers to both the University of Kansas and Kansas State and a basketball scholarship to Kansas State, he chose to walk on to KU’s basketball team.  While at KU, he met the love of his life, Carol Anne Keller, whom he married in 1959.   He loved and cared for her throughout his life.  After John and Carol wed, John attended law school at Washburn University, where he found another great love of life, the law.   After law school, he worked for and became a partner of Payne & Jones law firm.  Soon after starting at Payne & Jones, John and Carol had three sons, Michael, Mark, and Sean.  They lived happily in Olathe, Kansas, where John was known to play a mean game of tennis.  John later became a US Bankruptcy Judge, a role that gave him much joy.   After retirement, John concentrated on his grandchildren Kaitlin, John, Caroline, Camden, Sophie, and Colby, whose accomplishments made him very proud.  John absolutely cherished attending the events in their lives and encouraging them in their pursuits.  One of his passions was providing them with his knowledge and guidance to help them throughout their lives.  They all loved their grandfather dearly and will miss him very much.  John also appreciated his great friends, Phi Kappa Psi fraternity brothers and golf buddies.  Later in life, John became obsessed with golf and in the end died happily with a golf club in his hand.

John was preceded in death by his parents, John and Virginia; brother, Bill; and daughter-in-law, Holly.  He is survived by his wife, Carol;  sons and daughters-in-law: Michael and Stephanie, Mark and Risha, and Sean and Reiko, and his grandchildren: Kaitlin, John, Caroline, Camden, Sophie, and Colby.

Visitation will be Thursday, September 9th, from 6:00 PM to 8:00 PM followed by a funeral service on Friday, September 10th, at 10:00 AM.    Both will be held at Johnson County Funeral Chapel & Memorial Gardens, 11200 Metcalf Avenue, Overland Park, KS. Private family burial following the service.

Donations in lieu of flowers can be made to the American Brain Tumor Association.  Donate to ABTA .org

To order memorial trees or send flowers to the family in memory of Honorable John Flannagan, please visit our flower store.