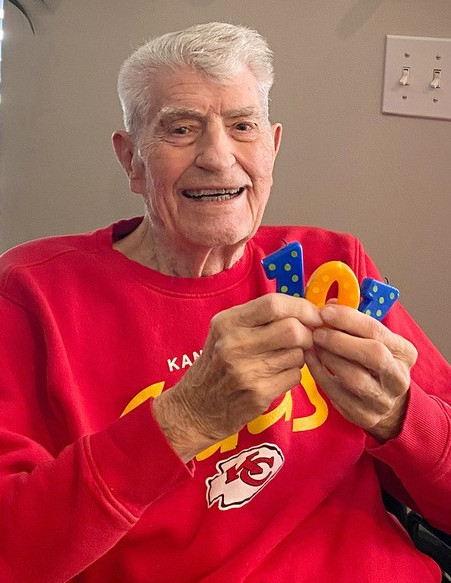 J.B. King of Overland Park, KS, passed away on Thursday, April 7, 2022 at the age of 101.  He was born on January 30, 1921 in Ryan, Oklahoma to George W. and Martha Jane (Johnson) King.  J.B. was preceded in death by his wife, Bonnie J. on December 7, 2018. He is also predeceased by his parents and his sisters and brothers, Anna Bell King, Eva Janko, Marcella Hipsak, Ollie King, Alva King, and Addie King.

In his early years, J.B. worked on the family farm in Oklahoma. During the depression he participated in the W.P.A. program, working on county roads earning $1.50 per day. During WWII, J.B. was a pilot, serving in the Army Air Force from April 20, 1943 to February 27, 1946.  He was honorably discharged at Ft. Leavenworth, Kansas.

For 35 years, J.B. worked his way through the ranks of Western Auto Supply Company, beginning as a store stockman and eventually serving for many years in executive positions in Dallas and the headquarters in Kansas City. He avidly lived his life and enjoyed traveling with his wife and family. After retiring from Western Auto he continued to stay busy in the real estate and commercial food distribution industries as well as finding time to volunteer at the Overland Park Senior Center serving meals. J.B. was a member of Emanuel Baptist Church and Pilgrim-Rock Masonic Lodge #522 in Tulsa, OK.

A Celebration of Life Service will be held at the Johnson County Funeral Chapel, 11200 Metcalf Ave. in Overland Park on Saturday, May 21st, 2022 at Noon with visitation prior to the service at 11:30 a.m. Inurnment to follow in the Johnson County Indoor Mausoleum, Courtyard of Memories.

To order memorial trees or send flowers to the family in memory of J.B. King, please visit our flower store.