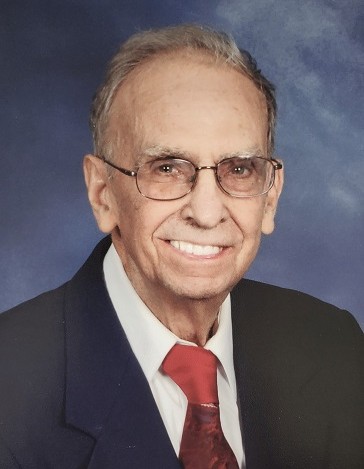 Due to current restrictions, attendance is limited. Please RSVP on SignupGenius.com . The church service will be livestreamed at Watch Us – Knox Church . In lieu of flowers, donations to Knox Presbyterian Church or Aberdeen Village Good Samaritan Fund are suggested in his memory.

Jerry was born on April 25, 1930 in Trenton, IL. He was the second child and oldest son of Charles Melville Ray and Francis Ann (Hemann) Ray. Jerry’s family moved to Pine Lawn, a suburb of St. Louis, MO, when he was a child. He graduated from Normandy High School in 1948, fell in love with Gerry Clawson and married her on March 3, 1951.

Jerry was drafted and served in the US Army from 1951 to 1953 as a private-first class and radar technician at Fort Lee, NJ. After his discharge he went to work as a field engineer for IBM in St. Louis. He rose to the position of manager and was transferred in 1965 to the Kansas City offices of IBM where he worked until his retirement in 1991. During his years working in Kansas City, he also served as the executive director of the National Alliance of Businessmen, Kansas City chapter. His role in this business/government partnership was to provide business leadership and expertise to train and prepare disadvantaged youth and adults for success in the workplace. Jerry’s career advancement brought him and his family to Overland Park, KS in 1966 and a home in Nall Hills where he and Gerry raised their 3 children and enjoyed their 6 grandchildren until the couple moved to Aberdeen Village in 2019.

Ordained as a ruling elder in the Presbyterian Church (USA), Jerry’s faith in Jesus Christ shaped his identity and values. He was an active member and leader at Knox Presbyterian Church where he served as a Sunday school teacher, youth leader and on the Session (church board). Among his greatest contributions were his skills and leadership as the chair of the building committee for the current church building.

A skilled engineer and craftsman, he was fascinated by how things worked and could spend hours fixing his car, boat, house, or countless appliances. Tools were his favorite toys and when a piece or part, didn’t suit his purpose, he would redesign and rebuild it to work as he wanted. Jerry was also an excellent woodworker, building furniture, cabinetry and more to improve his home.

Jerry loved the outdoors, especially camping and boating with his family. He was a member of the Boy Scouts as a Sea Scout in his youth and later as a troop leader.  He was an adventurous traveler, especially in retirement. He was a Master Gardener, serving as a Gardening Hotline volunteer through the Johnson County Extension.

To order memorial trees or send flowers to the family in memory of Jerry Ray, please visit our flower store.