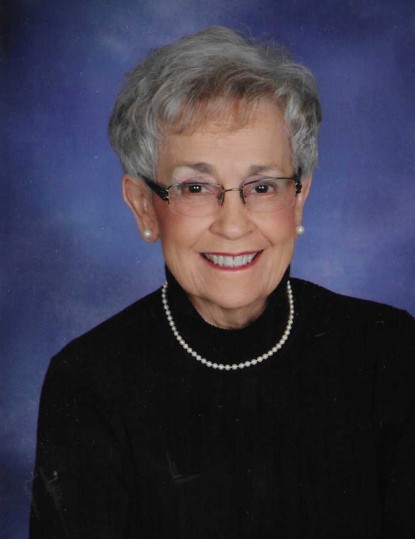 Joan Bernice Schmitt (nee Hillman) passed peacefully into God’s hands while sleeping in the early hours of Sunday, August 15, 2021.    She was the second child of Marie and Erwin O. Hillman, born in 1928 and spent her childhood years in Omaha, NE later moving to Atchison, KS where she finished high school at the top of her class.  During WW II, she followed her family to Fort Dodge, IA until she was married in 1950.  She had three great passions in her life – her husband and family, her church, and her music.

She married her high school sweet heart, Paul J. Schmitt, Jr. who preceded her in death in 2008. They were married in 1950 and had the first of her four boys in 1953 at which time she gave up work as a bookkeeper to attend to her family.   In 1957, the family moved from St. Joseph, MO to Kansas City, MO where she lived in the same house until moving to an assisted living facility near family in Chicago, IL at age 87.  Being a meticulous housekeeper was a challenge with four boys in and out, playing baseball, mowing lawns and generally breaking a window every other year throwing something!  But, dinner was always on the table by 5:12 pm when dad was working a 40-hour schedule, Christmas time was always a chance to decorate, and she found time to read our stories, buy us clothes, cut our hair, do her own perms, make some coffee cake, listen to our problems from school, make our favorite birthday food, put away some money for something special and make sure homework was done.  A 20-foot phone cord kept her in touch with her friends while she ironed and kept things running!

Calvary Lutheran Church was her social and spiritual rock.  Sunday mornings the whole family was at church by 8 AM.  Mom accompanied the choirs, played the organ and the boys sang in youth choir.  Later, mom played the organ professionally and directed choirs for churches across Kansas City.  She had started with piano as a young girl.  She then taught herself the pipe organ and played the organ in church for the first time at age 16.   She had kindled a passion that sustained her for the next 71 years.  She took organ lessons as an adult, joined the American Guild of Organists and was proud to play her (and our) favorite piece – Toccata and Fugue in D Minor by J.S. Bach whenever asked.  Since she and dad had a pipe organ installed in our house (it took up a whole room), the house would vibrate with “The Fugue”.  She loved that pipe organ!  She was very proud of her participation in the combined Kansas City area church choir performance of Handel’s “Messiah” each Christmas.  She loved her church friends and played in the same pinochle club with church friends from 1957 until illness and age intervened in her mid-80’s.  Her children all are professed Christians which was a source of solace for her until her death.  One son married the minister’s daughter.  Another became a Lutheran minister.  It would be hard to talk about the Schmitt family and not see mom and dad and the four sons lined up in their Sunday best for a photo op.

Mom will be missed, by her family and friends and relatives, but her legacy of selfless service for those she loved most will live on.

She is survived by her four sons and their wives:

To order memorial trees or send flowers to the family in memory of Joan Schmitt, please visit our flower store.