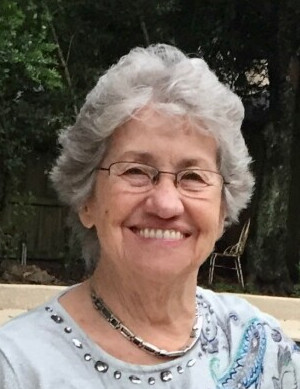 She was born to Ted and Viola Lusk on August 27, 1937, in Aurora, Missouri. Darlene graduated from Aurora High School in 1955 and attended Southwest Missouri State (SMS) college in Springfield, Missouri where she studied physical education.

Before college, she met the man who would become her husband, John Dallas Murphy. John returned from serving in the Korean War, reunited at SMS college and were married in 1958. They lived and grew their family in Missouri, Ohio, Mississippi, Iowa, Kansas and Texas. Darlene and John were married for 43 years before John’s passing in 2001.
Darlene worked as a payroll specialist for a chain of dry cleaners and retired from her working career as an accounting administrator for Nokia in Dallas, Texas.
Darlene played the French horn in high school, and it was a foundation for a love of music her entire life. A good Souza march or tune from Elvis would light her up and get her dancing!  She loved Dr. Pepper, a good pork tenderloin sandwich, attending Kansas City Chief’s football games with her husband, family and friends and cheering on the Texas Longhorns. And they used to say that when Darlene was born, she was so tiny they would keep her in a shoebox.  We think that’s where she got her love of high heel shoes!
Darlene is survived by her four children: John Murphy (Mike) of Omaha, Nebraska; Teresa Pemberton (John) of Overland Park, Kansas; James Murphy (Julie) of Houston, Texas; and Kristie Murphy of Trophy Club, Texas.  She is also survived by five grandchildren: Taylor, Gage and Shay Pemberton; Benjamin and Jacob MacDonald. Brother Eddie Lusk (Barbara), nieces, nephews, and in-laws. Darlene was preceded in death by her husband John, and parents, Ted and Viola.

A private graveside service will be held Monday, September 12th at 11 a.m. at the Johnson County Memorial Gardens in Overland Park, Kansas.  In lieu of flowers, donations may be made to the Alzheimer’s Association (www.alz.org).
To order memorial trees or send flowers to the family in memory of Joyce Murphy, please visit our flower store.