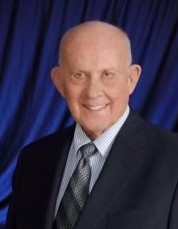 He attended Waverly Grade School and Waverly High School, graduating in 1949.  He graduated from the University of Kansas in 1954 with a B.S. in Civil Engineering and in 1970 received an M.S. in Environmental Health Engineering.   Following college, he was employed with Cities Service Oil Company, Schwab & Eaton Consulting Engineers, and the Environmental Protection Agency.   He served 28 years with the United States Air Force in both active and reserve status, retiring in 1982 with rank of Lt. Colonel.  He was a member of Rolling Hills Presbyterian Church in Overland Park.

A family memorial service will be followed by a graveside service in Waverly Cemetery.

The family wishes to extend our deepest appreciation to Dr. Carne Nulton who for many years provided kind and attentive care for our father.   In lieu of flowers, the family suggests contributions in honor of Dr. Nulton to FIRE Foundation, The Catholic Center, 20 W. Ninth Street, Kansas City, MO 64105. firefoundation.org.

To order memorial trees or send flowers to the family in memory of Leland Ross Duvall, please visit our flower store.