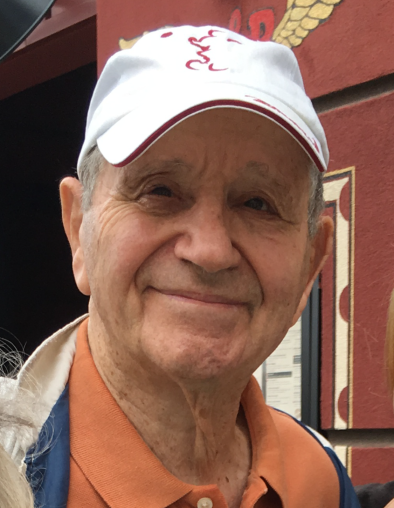 Leo Edward Ashner, Overland Park, Ks., passed away peacefully at home on Sunday, June 7th, 2020. Leo is survived by his wife of 69 years, Dorothy “Dottye” Ashner, his brother Herb Ashner, sister Frances Feldman, and four sons Steve, Tim, Jeff and Chris, their wives, and 8 grandchildren. He was preceded in death by his parents Charlie and Bessie, his sisters Eva, Anne Mae, and Dorothy, and his brothers Barney and Louie. Leo was born December 3rd, 1925 in Kansas City, Kansas on the family dairy farm, where he grew up milking cows and later delivering milk. When he was 15, he met the love of his life, Dottye VanHercke, introduced by his best friend Virgil Bodine. After graduating from Shawnee Mission Rural (Shawnee Mission North) in 1943, he ran the family dairy business, Greenwood Acres Dairy Farm. In 1950, he married his sweetheart, Dottye, and they lived in Mission, Ks. Leo quickly gravitated toward the real estate industry, becoming a top salesman for J. Lester Brown in 1954. In 1957, he formed a partnership with longtime friend, Virgil Bodine, Bodine Ashner Builders, and began a home building business that would span six decades, and continues on today. Leo left his mark on Kansas City by building hundreds of homes and developing many communities including Four Colonies, Colony Woods, Colony North, Colony Hills in Lenexa, Berkshire, Bristol Place, Wilshire, Wilshire Place in Leawood, Cedar Creek in Olathe, and all of the Wilshire developments throughout Overland Park. He worked side by side with all of his sons in the business. Serving as President of the Kansas City area Home Builder’s Association, National Life Director of the NAHB, Leo was admired and respected by everyone in the industry. He was a true leader andicon, he elevated the name “Ashner” to symbolize quality, integrity, and community. Leo’s true love was his wife and family. His greatest memories were coaching his boys’ baseball and basketball teams, spending holidays and family time together and taking family vacations. Known for contagious smile, funny jokes and one-liners, he always saw the good in every situation. Leo felt very blessed to have lived such a long, full, and wonderful life with his Dottye and family. Services will be Thursday, June 11th, 2020 at 1:00 at Johnson County Memorial Garden, 11200 Metcalf, Overland Park. Seating will be limited but the service will be livestreamed at johnsoncountychapel.com.

To order memorial trees or send flowers to the family in memory of Leo Ashner, please visit our flower store.