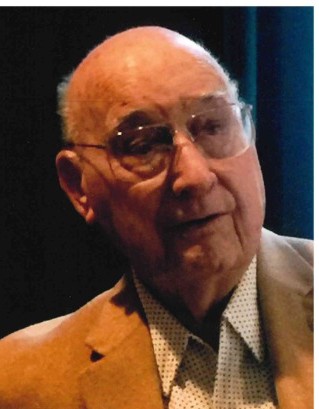 Ed was a graduate of Bowling Green State University in Ohio, with a degree in Business.  It was there he met his future wife, Dorothy Bell, of Elyria, Ohio. Ed played on the college baseball team and was a member of Alpha Tau Omega fraternity.

In 1943, Ed enlisted in the Navy. He earned the rank of Ensign and served as a Communications officer in the American Theater and the Asiatic Pacific before completing his service in 1946.  While stationed in San Diego, Ed and Dorothy were married August 31, 1944.

Returning from the service, Ed worked for his father-in-law in the Bell Company, a highly respected men’s clothing business in Elyria, Ohio.  It was there that Ed began to develop his skills as a salesman. After moving to Denver, Colorado, Ed began his long career in heavy construction machinery sales. They moved to Glenwood Springs, Colorado where they lived until 1955.

Ed decided that greater opportunities might be found in Kansas City.  He moved his family to Prairie Village, Kansas in 1955.  He joined the Dean-Hobson Machinery Co. as a territory salesman and used equipment manager.  In 1958, he decided to form his own heavy construction machinery business and entered into partnership with Raymond Finch.  Their new venture was the Finch-Bayless Equipment Co., Inc. Ed retired in 1988, but continued to buy and sell used cranes until 2017.

One of his greatest pleasures was maintaining his beautiful lawn, gardens, and fruit trees.  He provided vegetables and fruits to family and friends and joyfully entertained countless children with wagon rides behind his tractor.Ed and Dorothy were members of the Village Presbyterian Church for 65 years, where Ed served as a deacon, trustee, and usher. They were members of Milburn Country Club for 56 years.  Ed was an avid golfer and was proud to have shot his age at 91.  They also loved playing bridge and were members of several duplicate bridge clubs.  Ed was also a Mason and a Shriner.

When asked how he would like to be known, Ed replied, “To be known as a friend.” He said that if he had to choose between a friend and money, he would definitely choose the friend.  We know that to be true.

A private family graveside service will be held Saturday, July 18, 2020 at Corinth Cemetery.  In lieu of flowers, the family suggests donations to the Village Presbyterian Church food pantry www.villagepres.org

To order memorial trees or send flowers to the family in memory of Leo Bayless, please visit our flower store.