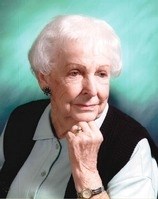 Marjorie J. Rensenhouse passed away on June 4, 2021 at the age of 103. Marge was born of January 22, 1918 in Fort Wayne, Indiana to Nina and Lawrence Dennis. She met her husband, Proctor D. Rensenhouse (Jim), while working as a secretary in Fort Wayne. Marge and Jim made their home in Kansas City and later in Prairie Village, Kansas where they raised three children.

Marge loved to entertain family and friends. She had a competitive spirit, which made her an accomplished golfer, bridge player, and loyal Chiefs and Royals fan.

To order memorial trees or send flowers to the family in memory of Marjorie Rensenhouse, please visit our flower store.