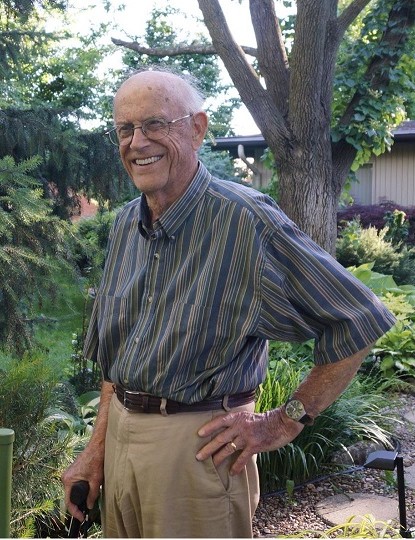 Marvin Kinyon Snyder of Overland Park, Kansas was a nationally recognized plant collector who served in World War II in the 99th Infantry Division and was captured in the Battle of the Bulge.

Marvin was born November 18, 1925 in Topeka Kansas, the son of Vesta and Ralph Snyder.  He attended Topeka High School where he took all the drafting classes offered.  After graduating midterm he was drafted into the army February 1944.  In the 99th Infantry Division, he was immediately thrust into combat in the Battle of the Bulge, where on December 18, he and others became cut off from their battalion and were taken prisoner by the Germans.  During his four and a half months of captivity, Marvin experienced frostbite, lost 45 pounds and was forced to march over 250 miles between camps as the Germans attempted to evade the advancing Allied forces.  He also was the recipient of kindness as one German woman on a train secretly slipped him cookies while no one watched.  After two foiled escape attempts, he was finally liberated on April 28, 1945.  He earned three battle stars.  Some of his experiences are included in the books Ex Prisoners of War, Stories of Faith, Integrity and Courage and Once Upon a Time in War, the 99th Division in World War II.

After finishing his Service obligation as a draftsman, Marvin attended Kansas State University where he earned two degrees in three years: Bachelors of Architecture in 1948 and Architectural Engineering in 1949.  K-State is also where he met his future bride Emelie Kirk whom he married February 1, 1948 and they moved to the Kansas City area.  He personally designed and supervised the construction of their Overland Park home in 1959.

Marvin worked for Butler Manufacturing for 38 years, most of that time as manager of Research and Development.  After retirement, he continued as a consultant to Butler handling all of their global patent activities.  In September 2015, he completed 66 years with Butler as an employee or consultant.  Over that span he developed five patents and brought together components for many roof and wall products that were important parts of Butler’s product line.  He received many honors and awards for his work including induction into the Metal Construction Hall of Fame.

His work took him to Europe several times where he and Emelie also visited world-renowned gardens.

Though always an avid gardener, after retiring from Butler in 1987, Marvin became especially interested in dwarf conifers and served two terms as president of the American Conifer Society.  His duties found him traveling to many parts of the country for conferences and garden tours, with Emelie by his side.  His yard in Overland Park, with hundreds of dwarf conifer species, Japanese maples and hosta varieties was a showplace on many local and national garden tours over the years, the subject of photo essays for newspapers and magazines, was visited by many notables in the gardening world, including artist Marjolein Bastien, and is now in the Smithsonian Archives of American Gardens.  Marvin always said that his wife Emelie was his muse and gardening inspiration and that the gardens were really for her.  He collaborated with sculptor Lee Blackwell to design metal artwork and fountains to complement his yard and volunteered his talent to design gardens for Linda Hall Library, universities and friends.  Powell Gardens was a favorite recipient of his conifer expertise and plant donations.  He facilitated the donation of their dwarf conifer garden and dedicated a section of their Heartland Harvest Gardens to Emelie.  For many years, Marvin helped Emelie with her volunteer work for the Kappa Kappa Gamma Alumnae and was an active member of the Kansas City Ex-Prisoners of War group.  When younger, Marvin produced many fine watercolor paintings and built an extensive stamp collection.

Survivors include son Michael and his wife Beth of Ramona, CA, and son Kent and wife Phyllis of Portland, OR; grandchildren Gwyn Dill and husband Kevin of Lenexa, Gretchen Schmanke and husband Darin of Olathe, Bryce Snyder and Taegan Snyder of Portland OR; and four great-grandchildren, Lana and Janae Dill, and Maya and Nolan Schmanke.  He was predeceased by his wife Emelie in 2005 and brothers Warren and Harold.

Contributions in Marvin's memory may be made to the Marvin and Emelie Snyder K-State Gardens Scholarship in care of Kansas State University Foundation, 1800 Kimball Ave., Suite 200 Manhattan, KS 66502-3373

Services are pending until mid-summer 2021.

To order memorial trees or send flowers to the family in memory of Marvin Kinyon Snyder, please visit our flower store.