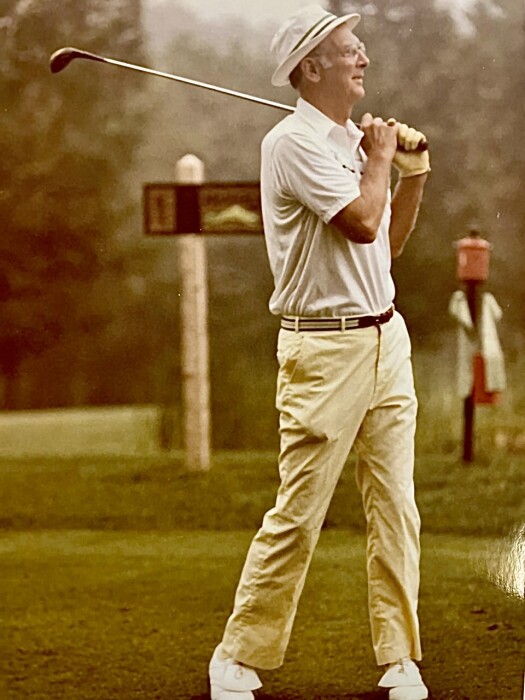 Ozzie was born in Arma, Kansas on March 25, 1926, to Jakeo Martin and Beulah Nelson Shoup.  He grew up in Arma and nearby Pittsburg, Kansas, with his older sister, Daphine, whom he adored and from whom he received much joy throughout his life.  Ozzie attended Central Elementary School and Lakeside Junior High School and graduated from Pittsburg High School in 1944.  He registered for the draft on March 27, 1944, two days after his 18th birthday and enlisted in the Navy after graduation.  He was stationed at Radar Technician school at Navy Pier in Chicago for one year before being assigned to officers training at Stanford University for the 1945/46 academic year.  He enjoyed one year of easy duty at Stanford, briefly playing on the varsity basketball team before resigning to rest his injured knee and focus on his studies.  He was discharged from the Navy on June 16th, 1946 and transferred to the University of Oklahoma the following September, all made possible by the GI Bill.  He chose OU over Stanford because his mother was in poor health and he wanted to be closer to home, and his childhood friend, Bob Barbero, was already enrolled there.  He joined the Sigma Phi Epsilon fraternity where he washed dishes to pay for his meals and played on their intramural basketball team.  A few months later he met his bride-to-be, Dorothy Lee (“Dee”) Watkins, of Nowata, Oklahoma, on a blind date.  Disregarding their 12-inch difference in height, Ozzie and Dee were married on a cold, snowy Saturday, January 24th, 1948, in Nowata, beginning a 72-year marriage which spawned four sons, eight grandchildren and, so far, eight great-grandchildren.  They honeymooned one night in Tulsa and returned to OU where Dee worked for a professor in the math department and Ozzie continued his studies.

Ozzie graduated from OU with a General Engineering degree in May 1949 and went to work for Cooperative Refineries Association/Farmland Industries in Bartlesville OK.  The couple rented a home nearby in the small town of Dewey, a town they would call home for 17 years, and their first child, Mark, was born a few months later in October 1949.  They were blessed with three additional sons over the next 12 years, Dan, Brad and Scot, before Ozzie was promoted to a job in the home office in Kansas City in 1967.  As Mark graduated from Dewey High School and left for college, the rest of the family moved to Mission, Kansas, soon to become Chiefs and Royals fans for life.  Ozzie worked for the same company for 37 years.  He was Senior Vice President of Farmland and head of the refinery division when he retired in 1986 from the only full-time job he ever had.  His career blessed him and his family in many ways, and he deeply appreciated his many long-term friendships with his colleagues at Farmland and business associates at other companies.

As a young man, Ozzie was an outstanding student.  Just a few years ago, one of the girls in his 8th grade class at Lakeside Junior High School sent him a newspaper clipping from 1939 noting that he was one of eight students, and the only boy, to earn straight A’s for the year.  Ozzie credited his score on an optional math test with his acceptance into the Navy, which he viewed as a lucky break given that he didn’t know the purpose or importance of the test when he decided to take it.

Ozzie also was an outstanding athlete.  He learned to swim and play baseball at the YMCA in Pittsburg and was a quarterback on the varsity football team at Pittsburg High as a sophomore, but sustained a knee injury that would end his football days.  He continued as a star on the varsity basketball team, playing forward at 6’ 4”, and was the only player on the team to shoot “Western” style, or one-handed.  He took up a love affair with golf in his 30’s and played two or three times a week throughout his long retirement, including the week before he broke his hip in November, 2020.  He was 94 years old when he played his last round at his “home course”, Sykes/Lady Overland Park Golf Club, across the street from his home of 20 years in Stratford Court, where he led the Home Owners Association for several years.  He scored a hole-in-one on three occasions, holed out for eagle from 150 yards once, and shot his age regularly during the last 12 years of his golfing life.  He was grateful for all of it… and considered himself a lucky man!

Ozzie was also grateful for his well-being and that of his family.  Though he experienced poverty as a child and lost several classmates in World War II and his mother to cancer in 1948, he often remarked with amazement about the good health, happiness and good fortune that he and his family experienced throughout his adult life.  He was a humble, prudent man and a saver, but a rational optimist and a consistent leader, a man of faith in deed and spirit, and a gentleman at all times (though he seemed to have a problem with leaving adequate tips for waiters – most likely a product of his depression-era childhood).  His family and friends saw a man who was the same man every day, a man of commitment and faithful service, a joyful man who was slow to anger, quick to forgive, never held a grudge, and generally never had a bad word to say about anyone, perhaps with the exception of a few political leaders of the other party.  Through example, exhortation, and discipline, he instilled in his children a sense of healthy pride and faith in his family and respect for others.

Ozzie’s road to his Christian faith started as a child when his older sister Daphine (“Sis”), a strong believer, started taking him to the First Methodist Church in Pittsburg where he played on the church basketball team.  After that introduction, Ozzie was a lifelong Methodist, attended worship services every Sunday and often participated in Sunday School, men’s bible studies and social activities at church.  However, he was baptized late in life after he determined that he likely hadn’t been baptized as a baby.  He and Dee were members at Dewey Methodist Church from 1949-1967, Old Mission Methodist Church in Mission, Kansas, in the 70’s, 80’s and 90’s, and Church of the Resurrection in Leawood, Kansas, for the last 25 years.

In addition to golf, Ozzie enjoyed fishing with Dan and his grandchildren, especially on the dock at their beloved cabin at Grand Lake, OK, near Two Tree Island.  He loved watching his sons play football, basketball, baseball and soccer and never missed a game.  He coached many little league baseball and basketball teams.  He was home from work at 5:30 every day to shoot a few baskets in the driveway with his boys and sit down for Dee’s home cooked dinner.  He always had the back of his children or wife and always had a plan for their welfare.  His children, grandchildren and great grandchildren brought him much joy and he was very biased about their accomplishments and good nature.  He was an avid fan of the Chiefs, Royals, Jayhawks, Shawnee Mission North Indians and Dewey High Bulldoggers.  His children were all KU graduates and appreciated his loyalty to the Jayhawks over his own alma mater, OU.  How avid a fan was he?  He watched almost every Royals game this past miserable season, often waiting until they were down six or eight runs in the eighth inning before switching the channel to watch an episode of Gunsmoke before bedtime.  He loved John Wayne movies too.

He was an engineer and carpenter at heart, could fix anything that broke on his big workbench and knew how to use a protractor and slide rule.  In the 1960’s, he organized the homeowners on his block to fund and construct a block long sidewalk using their own labor!  With a little help from a few friends, he doubled the size of the family’s first home at 300 S Ponca in Dewey, at night and on weekends!  While they were living in it!  In retirement, he cherished the opportunity to oversee the reconstruction of the pond at Stratford Court where he lived for 20 years.  He liked to write letters on graph paper and often used all capital letters.  He always wrote the letter ‘a’ just like typeface!

Ozzie was an ever-faithful, diligent and loving husband, father, friend and colleague.  All will miss his towering presence in their lives. His family cherishes the vision of his heavenly meeting with his Lord and Savior, Jesus Christ, and a joyful righteous reunion with his parents, his “Sis”, Daphine, and his wife and their mother, Dee.

A Celebration of Life service is planned for 1:00 pm, Saturday, October 15th, at the Wesley chapel at The United Methodist Church of the Resurrection, 13720 Roe Ave, Leawood, KS, with reception to follow at Sykes/Lady Overland Park Golf Club, 12501 Quivira Road, Overland Park, KS

In lieu of flowers, memorials are suggested in his memory to Pittsburg Kansas YMCA at https://operations.daxko.com/online/5277/OnlineGiving/Donation.mvc

To order memorial trees or send flowers to the family in memory of Oliver Shoup, please visit our flower store.