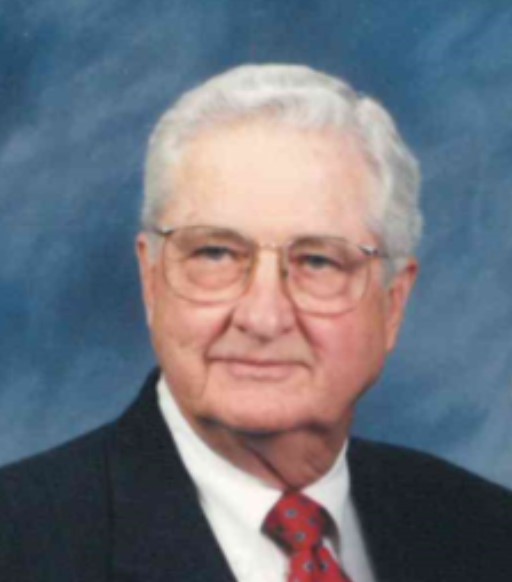 Robert Harry Mullett, 95, passed away peacefully at Research Medical Center on December 18th.  He was born July 2, 1925 in Quitman, Mississippi though having lived in the Kansas City metro area since 1955.  Bob’s father was a native Kansas Citian employed by the Long-Bell Lumber Co. of Kansas City, as General Manager of the Quitman, MS Division at the time of his death.

During his school years, he was active in the Boy Scouts earning his Eagles Scout Rank and playing in the band.  After graduating from Quitman High School, he entered WWII serving in the 36th Infantry Division in France, where he earned his Combat Infantry Badge and awarded the Bronze Star.  Returning from the service, he entered the University of Mississippi where he was a member of Sigma Nu Fraternity, serving as president.  After graduation in 1949, he began his first career with Spencer Chemical Co. (later Gulf Oil Corp.) until 1968 when he began his second career with Commerce Bank until his retirement in 1995.  During his business career he served as Director, Board Member and active in the following: Joan Davis School, Junior Achievement, Homestead Country Club, and Indian Fields Homes Association, Junior Chamber of Commerce, Kansas City Chamber of Commerce and the Salvation Army.  Bob spent his retirement years enjoying golf, tennis at Homestead County Club, skiing, hunting, singing in the Village Presbyterian Church choir, volunteering in the church food pantry and serving the church as a Deacon and Elder.  He was a faithful member of FCA Bible Study and a resident of Prairie Village for 50 years.

Bob was predeceased by his Joanie, wife of 48 years, his parents, and his brothers, Dick and Bill.  He is survived by his son, Mark and his wife Teresa and grandchildren, Bob of Plains, KS and Caroline of Lenexa, KS.

A private family inurnment will be held at Village Presbyterian Church, 6541 Mission Road, Prairie Village, KS  66210.  In lieu of flowers your contribution to the Village Church Memorial Fund or Food Pantry or charity of your choice would be most appreciated.

A Celebration of Life for Robert will be held in the New Year after we are able to gather and celebrate life and in particular, Robert’s.

To order memorial trees or send flowers to the family in memory of Robert Mullett, please visit our flower store.