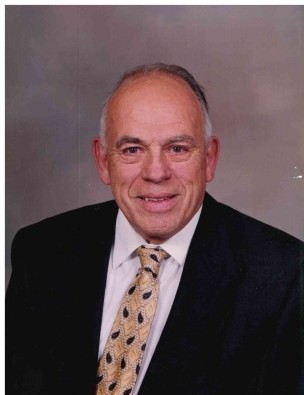 Robert A. Reagan, 95 of Roeland Park, KS, passed away August 23, 2020. Bob was born February 24, 1925 to Doris Kathleen (Williams) and Gaylord Nelson Reagan in Lafayette, Indiana.  They moved to Kansas City, Missouri the following year, where he was joined by his brother, Wilbur in 1927, sister, Juanita in 1930 and finally another brother, Ralph in 1932.

At the age of 17, Bob went to work for the Santa Fe Railroad before being drafted into the U.S. Army in July 1943 to serve in Europe during World War II.  His role as a member of an anti-aircraft battery eventually led him to achieve the rank of Sergeant.   He returned home to Kansas City in March of 1946 and went back to work at Santa Fe Railroad, remaining with the company until his retirement in 1985.

Bob’s many accomplishments included obtaining a private pilot’s license, membership as a Mason and Shriner, a supervisory position for Santa Fe Railroad, multiple positions on the board of Southridge Presbyterian Church, Scout Leader, board member and President of the Southern Kansas Country Club during the 70’s, charity work for Harvesters, wheelchair repair for Trinity Lutheran Hospital and Baptist Memorial, and foremost raising three sons, Charles, James and William Reagan.

Bob enjoyed traveling the country, especially by rail.  He made numerous trips to upstate New York to visit Lois’s family members near Lake Erie.  He always found time to help family members when they needed him and was always there to lend an ear when they just wanted to talk.  He was an extraordinary man with great patience and an abundance of knowledge.

He is survived by his three sons: Charles S. Reagan and wife, Diane, James A. Reagan and William M. Reagan and wife, Sara; 3 grandchildren: Kayla Wesloh, Robert Reagan, and Daniel Reagan; and a great grandson, Liam Wesloh, along with numerous nieces and nephews.

Bob was a member of the “Greatest Generation”, surviving through the Great Depression and WWII, striving to create a better world for us all to live in.  He showed that through his actions and his character.   We will miss him immensely and know there will never be another like him.

Visitation will be from 5-7 pm Thursday August 27, 2020 at the Johnson County Funeral Chapel, 11200 Metcalf Ave.  His funeral service will be 10 am Friday  August 28th at the chapel.  Burial will follow in Johnson County Memorial Gardens.    If desired, memorial contributions in memory of Bob may be made to the Shriners Hospital for Children, 4400 Clayton Ave, St. Louis, MO 63110.

To order memorial trees or send flowers to the family in memory of Robert Reagan, please visit our flower store.