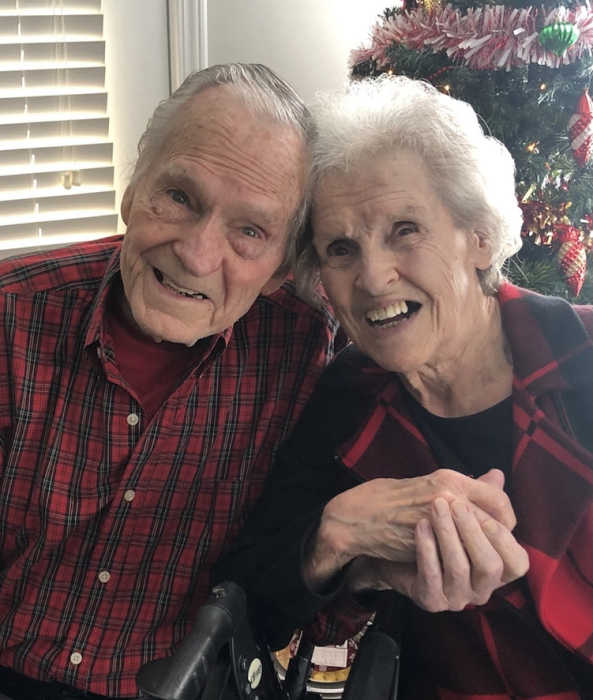 Robert Lewis Bear and Lois Ruth Bear, after a short illness, joined each other and entered into eternal life on July 28th and August 1st, 2021, respectively. Their spirit is carried on by 6 children, 25 grandchildren, 4 great grandchildren and an extended family of relations and friends from many walks of life.

We were all blessed to learn many valuable lessons from them both, during their 93 and 91 years, on this earth, respectively.

Here are just a few of the wonderful lessons they taught and left with us, so that we can carry on their legacy:

Be kind in the face of adversity to everyone as you never know what the other person is going through.

Cultivate a lifetime of friends that respect and honor your faith and your beliefs, but always make sure that you are sharing out of love, for love never fails!

Cry when you need to cry, but don't forget that a good laugh, sometimes with tears, brings healing to our souls!

Make sure you go to church and sing as loud as you can, when appropriate! Sing at home!  Sing in the shower!  Let everything that has breath praise Him!

Make sure that you love your pets and always have an "open door" policy for the dogs, especially, that your family brings home, unannounced, for those short visits that end up lasting a lifetime.  Cooper, our little puppy, we are so happy that you are a part of our family and have brought so much joy to all!

Take care of the poor and homeless.  Remember, when times were tough for you and how much you appreciated when others gave to you.

Forgive quickly and don't hold on to offense.

Finally, give without expecting anything in return which was a hallmark of their lives.  We are still hearing stories about their "hidden generosity" which is a guiding light for the foundation and legacy we are to build on now.

These were things that Robert and Lois, practiced together for 54 years of marriage.  They loved each other deeply, and loved their family passionately, as well.

Robert was born in Page, West Virgina, lost his parents (The Gallagher's), as a young child, to untimely deaths and was adopted into the large Bear family in Hinton, West Virginia.  He recounted many times the first day with the Bear's was Thanksgiving and how overwhelmed he was by all of the food.

However, as time went by, he was overwhelmed by their love and care for him, which he carried on to his own family for over 50 years of marriage.

Robert graduated high school in Hinton, West Virginia in 1945 and was in the Army during World War 2.

He then pursued a college career with degrees in Mechanical Engineering from Marshall College and Santa Monica College.

Robert moved to California and was hired by Douglas Aircraft Corporation and revealed to us, after many years of coaxing him to do so, that he worked specifically on rocket technology!

He went on to expand his knowledge and career with jobs at Aerojet General Corporation in California before moving to Kansas City after being hired by the Bendix Corporation, which is where he met Lois and where the magic between Robert and Lois began over 54 years ago.

Robert pursued a number of substantial jobs after Bendix, as a Mechanical Engineer and Design Draftsman, including Certain Teed Products, Black & Veatch and Alfa Laval.  Robert had many accomplishments including citations and commendations for excellent work in his field.

Lois was born in Kansas City, Kansas and finished high school there.  She pursued a degree at Bethany College of the Nazarene in Bethany, Oklahoma and then moved back to Kansas City.  She and Robert met at Bendix and began getting to know each other in the coffee break room.  They both said they drank way to much coffee during that time, which may be why Lois really didn't like coffee that much,as the years went by.

That was the beginning of a beautiful covenant relationship that honored each other and Jesus for 54 years.

After working at the HD Lee Corporation, Lois then pursued a career at Johnson County Mental Health and Retardation Center, that lasted for 20 years, as the Executive Assistant to Mark Elmore, the Executive Director at the time.  Lois was loved by her colleagues and the clients at JCMHRC.

Robert and Lois attended Oak Grove Baptist Church in Kansas City, Kansas for many years and then attended Overland Park Baptist Temple in Overland Park, Kansas, led by Pastor Roby, a trusted friend and spiritual counselor, for 20 years, as well.  In short, they loved Jesus and did all they could to deepen their walk with the Lord, serve their church community and the many friends they made over decades of serving Jesus.

And then, of course, Lois wrote - to everyone, about everything! You may read this and recall a letter or card from her that touched your heart or tickled your funny bone!  It was her ministry of love and outreach that spanned the length of her life.

Robert and Lois are the last remaining members of their perspective families, but are survived by their children, grandchildren and great grandchildren, whose photos they would share with family and friends frequently. The couple's children are as follows:

In addition, there are 25 Grandchildren, 4 Great Grandchildren and many in-laws, nieces, nephews, friends and family too numerous to list, but not forgotten.

In conclusion, our sweet mom and dad, also known as Grandma, Grandpa and Papa, both went home to be with the Lord just a few days apart. They began holding hands and ended their walk on this earth, holding hands, as always.  They honored God their entire lives and passed that on to their children, grandchildren and great grandchildren. We are so grateful for the giants they were spiritually and what they provided to our family for over 50 years. They are now celebrating with each other, many loved family members including Kevin; their own parents; siblings, Glenn and Lola, Lloyd and Jean; Jason, his fiance, their 3 precious babies and many other beloved family and friends, as they experience the glories of heaven and are most likely dancing together, on the streets of gold! Well done, good and faithful servants. We love you! Thank you for all the love you gave to us. What a priceless gift for us to build upon!

To order memorial trees or send flowers to the family in memory of Robert and Lois Bear, please visit our flower store.