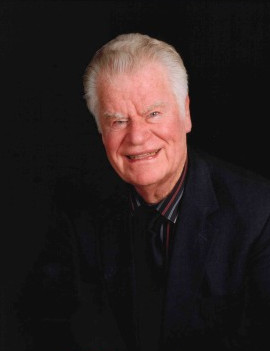 Ronald C. Pentz was born at home in Oskaloosa, Kansas on August 20, 1932, to parents  Minnie Marie Wagner Pentz and Carl E. Pentz. Raised in a Christian home, Ron prayed with his parents to receive Christ as his Savior the day before his thirteenth birthday. He led a life in service to the Lord using his gifts for His glory.

Learning carpentry from his father at an early age Ron became a gifted craftsman and built a long career with the United Brotherhood of Carpenters and Joiners of America. He spent his early years in residential construction before moving to large commercial projects like hospitals and schools including KU’s Lied Center.

Ron spent time as head carpenter for Lincoln General hospital in Nebraska. It was while singing in the church choir in Lincoln that he met Shirley Friesen. They were married on May 12th, 1956 and after their only daughter was born moved their small family back to Shawnee where they would spend 62 wonderful years together until Shirley’s passing. They loved serving the Lord together.

Ron served as Deacon and Elder, first at Southwest Bible Church, then Merriam Bible church which became Woodson Avenue Bible Church, and then finally at Lenexa Baptist Church. He also served on the board with Kansas City Youth for Christ. Ron later served on missions teams doing construction in Cypress, Eleuthera and Mexico.

Woodworking remained his passion in retirement and many hours were spent in the wood shop he built at his home and later at LakeView Village.

Ron always had a smile on his face and a cheerful countenance. He was a natural teacher of the Word and willingly shared his faith with anyone who would listen. He radiated loving kindness and was so patient and kind. He loved the Lord with all his heart, soul and mind and he served the Lord with gladness. His final wish was that his family would walk with the Lord.

His favorite scripture was Psalm 92:1-2: “It is good to give thanks to the Lord and to sing praises to Your name, O Most High; to declare Your lovingkindness in the morning and Your faithfulness every night”.

To order memorial trees or send flowers to the family in memory of Ronald Pentz, please visit our flower store.