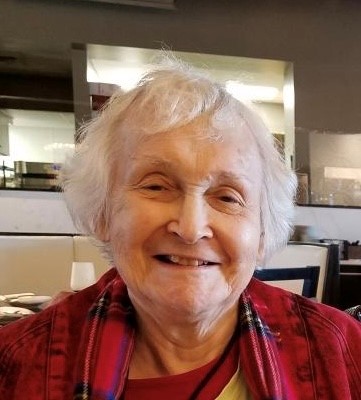 Rose Alice Cambern Grinstead—beloved wife, mother, aunt, grandmother, and great-grandmother—died peacefully at age 91 on July 23, 2022, at Lakeview Village Care Center in Lenexa, KS. A talented artist, Rosie was best known for her long career as a master quilter. She won national and regional awards, and her quilts were featured in Hallmark calendars and jigsaw puzzles. One of her quilts won a statewide competition honoring Kansas’s 125th birthday; it hung in the State Capitol for a year. Friends and relatives treasure her holiday wall hangings and the crib quilts she gifted for every new baby. Generous to the end, she made many of her last quilts for women’s and children’s shelters. Named for her paternal grandmother, Rose Cambern was born on October 27, 1930, in Kansas City, MO, to Anita Loretta Johnson Cambern and Theodore Jessup Cambern. Rosie grew up the oldest of two siblings, surviving a bout of scarlet fever as a child. She attended Monticello College in Alton, IL, and graduated with an art degree from the University of Colorado in Boulder. She then took a position as payroll manager at Howard, Needles, Tammen & Bergendoff. It was there that she met the love of her life, Willis Grinstead—a rural Missouri-born draftsman who was embarking on his engineering career. Will and Rosie married in March 1960 and raised two children: Julie Alice and Steven George. First living in Kansas City, MO, they soon gravitated to the Kansas suburbs of Prairie Village and Mission Hills. The family loved vacations in the West and Hawaii, all of which Rosie diligently photographed for slide shows afterwards. In their later years, Rosie and Will took scenic rail excursions throughout the country and cruises along the Alaska coast. Rosie enjoyed a longtime involvement with the American Association of University Women and the Quilter’s Guild of Greater Kansas City. Rose Grinstead is preceded in death by her husband, Willis, and her parents, Anita and Theodore Cambern. She is survived by her brother, Theodore Cambern Jr. of Overland Park, KS; daughter Julie Murphy (Kevin) of Kansas City, MO; son Steven Grinstead (Leigh) of Denver, CO; her grandchildren Amanda Ochs (Lucas) of Quinter, KS, Lindsay Street (Nicholas) of St. Louis, MO, Joshua, Rachael, and Andrew Murphy of Kansas City, MO, and Seth and Emma Grinstead of Denver, CO; and her great-grandchildren Wyatt, Erin, and Addison Ochs of Quinter, KS, and Grayson Street of St. Louis, MO. In lieu of flowers or cards, please consider contributions to the Lakeview Village Foundation or the Alzheimer’s Association.
To order memorial trees or send flowers to the family in memory of Rose Grinstead, please visit our flower store.