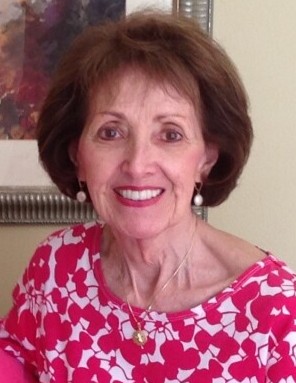 Sherry was born to Glover and Dorothy Williams, the first of four daughters, shortly after the great Depression.  Her parents had a love of God, Country and Family as did so many of thatgeneration.  Those values have been passed down to now include four generations.

Following her father’s tour of duty in WWII, the family settled on a small family farm in North Kansas City where her father and his siblings grew up.  They moved to Oakwood where Sherry enjoyed country living; as a result, her love of cooking started at a young age and life lessons of perseverance, faith, hope and prayer were instilled.

As the oldest of four, she was taught early the skills of being a mother and caring for others, which became a major focus in her life.  She always displayed a greater concern for others than herself.

She was a graduate of North Kansas City High School and attended the University of Kansas where she was a member of Alpha Delta Pi Sorority. Jayhawk basketball was a lifelong passion of our family.  She was married to Roger A. Jones for 36 years and they raised their son Gregory Alan and daughter Stacey Lynn with love and caring compassion.  She was “Nanny” to her two grandsons, Austin Daniel League and Hunter Christian League, both of Fort Worth, Texas.  It was a role she loved and cherished, always active in displaying love and nurturing them in Christian values.

She volunteered with many philanthropic, religious and hospiceorganizations.  She served as Alpha Delta Pi Alumni providence secretary, chapter visitor, and president. She was active in Kansas City Young Matrons, Jaycee Wives and volunteered her time with Shawnee Mission ISD to be part of her children’s education. She established the Shawnee Mission East community’s favorite fall event…the fresh lobster dinner flownhere directly from Maine, a fundraiser which is still active today. She was a member of Leawood Baptist, Colonial Presbyterian, Hillcrest Covenant, and Lenexa Baptist Churches.

Sherry had a style all her own.  Her children called it simple sophistication.  She had an exceptional skill for interior design.  Furnishings and accessories were plentiful but never pretentious.  There was a place for everything and everything was in its place.  Holidays were always exciting as traditions, heirlooms, and keepsakes would adorn the home as though you were in a movie.

She was the consummate mother, not only to her children but also to their friends and neighbors.  Everyone was welcome at her home and loved her gracious hospitality, and of course her God-given talent for anything and everything culinary.

She toured France, cooked with and studied under Julia Child and Simone Beck, two culinary giants.  She turned her passion for cooking and entertaining into a business, teaching kitchen organization, basic cooking skills and catering intimate and large gatherings in the display kitchens at Kansas City premier culinary and department stores.  She later expanded her business to include managing homes and estates.  She named her business Consider It Done! And if she took you on as a client, you could do just that.

She was a member of Indian Hills Country Club for 30 plus years and participated in many entertaining and hospitality related committees over that time.

The joy of the last 20 years was the love and affection she and Eldon found in each other, a remarkable story of faith, love and divine intervention.  They spent all their free time as loving partners, doting on each other with tender acts of compassion.  They enjoyed the arts, theatre, Kansas City fine dining, and nature’s beauty found in her garden, bird watching and long drives through country roads.

She is survived by her husband, children, grandchildren and sisters, Linda Smith of Overland Park, Kansas and Debbie Lambert of Naples, Florida. She is preceded in death by her parents and sister, Diann Veith.

Memorials are welcome in her name to the general mission fund of Lenexa Baptist Church.

To order memorial trees or send flowers to the family in memory of Sherry Lowry, please visit our flower store.