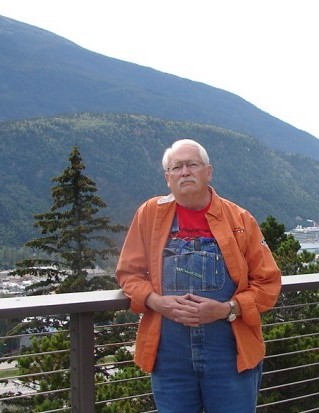 Terril S. Huntley came into this world in a snow storm in Colby, KS March 21, 1944 and took his last breath from his earthly home in Muscotah, KS in what could have been the coldest day of 2021, on February 14.  His proud parents were Selden C and Letha (Keller) Huntley.  Welcoming a baby brother was his big sister Jacqueline Kay.

As a child living on a farm in western Kansas Terry’s Mother and sister raised and sold chickens.  Remember the smell of butchering day, he never was one to want fried chicken but he in recent years he sure liked Chili’s chicken crispers.

Growing up he could be found reading books and most of the time one of those books was an encyclopedia.  He was a fast reader and could retain what he read so well.  He loved history.  I don’t know when he started telling jokes, but could always come up with a joke for whatever moment he might have been in.

After going to trade school for auto mechanic, he worked for a Studebaker dealership.

As a mailman he enjoyed delivering mail for several years in the most Polish American community in Kansas City, KS.   The day Social Security checks were delivered, he had a whistle he would blow, letting his patrons notice that he was coming.  He enjoy the Polish community, visited with them, would enjoy a “cold lemon aide” on some of those hot Kansas days and even learned some Polish.  Then he bid on and got the number one route in Kansas City, KS, The Brotherhood Building.   Enjoying his customers and visiting with them, but soon he and the Post management were not seeing eye to eye.

He left the Post Office, and he and his beloved wife, Janiece, moved out of the City to operate a small cafe in Muscotah, Ks.  Proud to say we thought we had pretty good food.  We enjoyed getting to know the people in the community, but decided we needed to make a little more money and not just friends we closed the Cafe and Terry got a job working at the shutter factory (Flairfold/Abitibi-Price) in Hiawatha, KS.  There his job was mostly working the grinding room, sharpening the different saw blades.  He liked working with the different machinery in the shop and even made a couple little tools that made things a little easier for different machine workers.

He enjoyed working with his hands, building things, and always planning for that perfect shop to tinker around in.

Along with his love for history came a passion for guns.  We enjoyed going to gun shows, selling guns and “Stuff” and visiting with the different people along the way.

Having an interest in so many things he could visit with most everyone he met.

Enjoying life on his little farm in Muscotah, at one point having his own cows, raising his own beef, raising his own pork, raising chickens (for the eggs only) and able to raise all the different cats, kittens and dogs… it was a good life.

Terril is proceeded in death by his Dad and Mother, Selden and Letha Huntley, his sister, Jacqueline Nunn, his nephew, Perry Burris and many Aunts and Uncles.

He leaves at home his wife, love and best friend of 42 years, Janiece (Shannon) Huntley.  Also surviving are his nephew Jeff (Kelli) Burris and one aunt Maxine Berry and many cousins and friends and family from his wife’s side.

Memorial contributions are suggested to the Pulmonary Fibrosis Foundation, the American Lung Association or to St. Croix Hospice in Hiawatha, Ks.

To order memorial trees or send flowers to the family in memory of Terril Huntley, please visit our flower store.