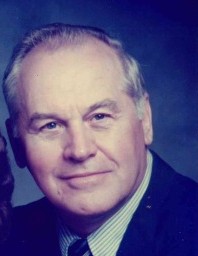 Victor P. Wolf, 99, Overland Park, passed away Wednesday September 29, 2021.   Victor was born August 9,1922 in Robertsville, MO to Victor L. and Martha Wolf. Victor grew up in Ferguson, Missouri and graduated from high school.    He then attended the University of Iowa where he enrolled in Flight School for 1 year before he entered the US Marines and finished school graduating at a Second Lieutenant.    He then trained pilots at Cherry Point and Edenton, North Carolina before becoming a Transport Pilot in Pacific flying Douglas C-47’s from June 1945 to May 1946 while stationed in Oahu.  He flew into Okinawa and Tokyo Japan and further into Tientsin and Shanghai, China.  Victor married Georgine Wrisberg on June 29, 1946.  Victor was honorably discharged from the Marines and started his 35year career with TWA Airline and retired as a Captain in 1982.  During those years he coached his Bob’s 3 & 2 baseball League in Kansas City, Missouri.  One of his fondest memories was when Bob was growing up, joining Bob and his friends in the backyard on the driveway for a game of basketball.   Bob’s friends could always count on him to fill the open spot on one of the teams.   In later years, Bob was a big follower of Kansas City Royals, Kansas City Chiefs and KU Basketball.  He enjoyed watching the classic movies on tv.  He was a member of Country Club Methodist Church.

Victor was preceded in death by his wife, Georgine in 2010 and a sister, Lois Cherekos in 2018.  He is survived by his son, Robert (Mary); grandchildren: Brent Wolf (Crissie) and Leslie Christy (Andrew); great-grandchildren:  Alice Christy, Lewis Christy, Hazel Wolf, and Violet Wolf; and one niece, Gayle Weber.

A private family service will be held.  Entombment will be in the Courtyard of Memories Indoor Mausoleum at Johnson County Memorial Gardens.  In lieu of flowers, memorial contributions in memory of Victor may be given to St. Labre Indian School. St.LabreIndianSchool,com

To order memorial trees or send flowers to the family in memory of Victor Wolf, please visit our flower store.