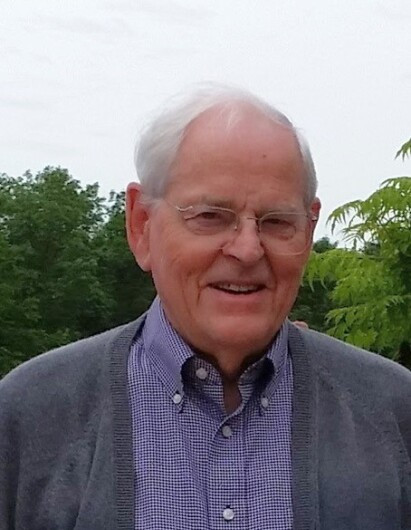 William Jess (Bill) Lynn passed away 5/29/2022 . He was born in Joplin, Mo. Nov 12, 1934 to parents W.E.(Pat) Lynn and Marie Lynn. He is predeceased by his brother Eugene. He is survived by his beloved wife of 66 years, sister Patricia Dawson( Tommy), son, W. Jess Lynn Jr. (Theresa Rebeck), two daughters, Sharon Anderson ( Mike Hill), Susan Lynn( John Caggiano), four grandchildren Matt Anderson( Amanda), Katie Joyce ( Rob), Cooper Lynn, Cleo Lynn, three great grandchildren Franny Joyce, Robin Joyce, and Rudy Anderson. Bill graduated from Joplin High School and the Univ of Michigan (B.S. Mech Engr). While Bill was a student at Michigan, Frances was working for United Airlines in Chicago. This entailed several long train rides from Michigan some free flights from Chicago. They were married Sept 11, 1955. After graduation in 1957, Bill and Frances moved to Wichita where Bill took a job as facilities engineer with Boeing Aircraft. The job required designing or improving equipment used in the manufacturing process. One day after having a tooth filled by a dentist friend, Bill said “I think you need a more comfortable tool to do that work.” Working at home, Bill made a rough prototype of the tool he had in mind. Testing of the prototype in the dentist’s office was promising. Working with the dentist Bill finished a working design which was patented and sold under the brand name Condensaire. The Condensaire was the dental practice standard until advances in materials replaced the silver amalgam used for filling dental cavities rendering the tool obsolete. After four years, Bill took a new job with Bendix in Kansas City and the family moved to Prairie Village. Five years at Bendix wore thin and Bill found a more challenging position at Certain-Teed Fiberglss. Designing machinery to turn molten glass into fiberglass was an interesting and demanding experience. A corporate merger with another glass manufacturing company required moving the engineering group to the Philadelphia area. Not wanting to move gain, Bill resigned. At that time , a local mechanical contractor, A. D. Jacobson,Inc. had an opening for a project manager with industrial engineering experience. Bill took the job. It must have been the right job at the right time. Bill ultimately bought the company and served as president until retiring. A.D. Jacobson Co. helped change the skyline of Kansas City completing mechanical work on major downtown buildings including Bartle Hall and Convention center. Bill was active in the mechanical contracting business serving on the board of the Mechanical Contractors Assn of America (MCAA) and the board of the National Environmntal Balancing Bureau (NEBB). He Served two terms as president of NEBB. Locally, he served as chair of the KC Mechanical Assn, and co-chair of the Pipefitter Apprenticeship Committee. Bill and Frances loved to travel. They visited all 50 states at one time or another and at least 38 countries. He liked to say we’ve been from Fairbanks to Capetown, from St Petersburg to Singapore and a lot of places in between. Bill was an accomplished painter and often painted scenes from places he and Frances visited. He also created a Christmas card for friends and family every year for 25 years. Bill was a member of the Oid Mission United Methodist Church and the Pathfinders Sunday School class. He served in many offices in the church including leading the major renovation and expansion. A private memorial service will be held at a later date. In lieu of flowers, the family invites donations to Growing Futures (https:// www.growingfutureseec.org) or Kansas City Repertory Theatre (https:// kcrep.org) in memory of Bill.

To order memorial trees or send flowers to the family in memory of William Lynn, please visit our flower store.