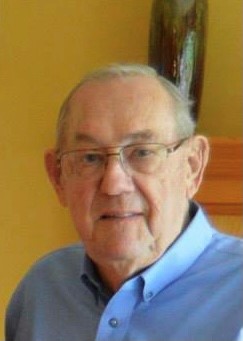 Named for his paternal grandfather, Will was born on November 25, 1932, in a farmhouse in Williamstown, Missouri, to Clara Elizabeth Taylor Grinstead and George A. Grinstead. He grew up on the farm the youngest of four siblings. When he was 12 years old, his oldest brother, Raymond, perished in February 1945 as a pilot in the Philippines during World War II. Forever after that tragedy, Will remained deeply bonded to his other siblings, Norma and Jack, and later to their spouses and families.

Will worked a memorable stint for two summers as a wildfire fighter in California. The experience left him with both a lifetime of stories and a prominent skin graft on his temple, the result of a near-fatal auto crash in a ravine. He went on to earn engineering degrees at Culver-Stockton College in Canton, MO, in 1954 and the University of Missouri at Rolla in 1956. During college he played trombone in a jazz combo, a band that played just adequately enough to proudly earn its members beer money for each night’s performance.

Embarking on his career as a civil engineer, Will worked for two years in the American Bridge Division of US Steel Corp. in Gary, IN, and Chicago, IL. Given a choice of Chicago or Kansas City, he chose the latter, accepting a position with the company of Howard, Needles, Tammen & Bergendoff. It was there that he met the love of his life, the well-read, deeply intelligent, and wickedly funny Rose Alice Cambern (the daughter of his boss, Theodore Cambern), who oversaw the company payroll. Born in Kansas City, she had attended Monticello College in Alton, IL, and graduated from the University of Colorado in Boulder. Will and Rosie became inseparable, marrying in March 1960 and raising two children: Julie Alice, born in 1961, and Steven George, born in 1962. Will and Rosie instilled in their children a lifelong love of western travels, the outdoors, and reading.

In 1976 Will moved on from HNTB to Harrington Cortelyou, a company he later bought with his longtime business partner Robert Crabtree and served as vice president and then as president. Licensed to practice in many states and garnering numerous awards for his work, his career took him from California to Maine and from Montana to Texas. His proudest professional achievement was his final one, the new Chouteau Bridge over the Missouri River in Kansas City.

All the while, he gathered friends and colleagues drawn to his quiet good nature, modest demeanor, sly sense of humor, and openly generous spirit. He enjoyed fishing, hunting, bowling, grilling, all things Kansas City, and his involvement in organizations such as the American Society of Civil Engineers and Kiwanis Club of Kansas City. He was a lifetime member of the Engineers Club of Kansas City, serving as its president in 1974.

He loved dogs all his life, starting with his long-lived childhood canine companion, a terrier named Rex. He served several years as a Boy Scout dad and leader, enjoying two “50-miler” treks in Colorado and a Boundary Waters canoe trip. On winter campouts he regaled the scouts with his recitations of Robert Service’s 15-stanza poem of the Yukon, The Cremation of Sam McGee—completely from memory. For a time he even ran a small cattle operation, a post-retirement project on 80 acres he bought in southeast Kansas adjacent to Rosie’s family’s farm alongside the Neosho River. Fascinated by railroads, he enjoyed train excursions with Rosie throughout the US. A favored destination was Alaska, along with family trips to Colorado, Wyoming, and Hawaii—vacations Rosie (later an award-winning quilter) diligently photographed for her famous post-vacation family slide shows. Will collected railroad artifacts and antique model trains; loved reading fiction, western history, and biographies; and enjoyed good food and wine. More than anything, he loved his children, grandchildren, and great-grandchildren, and being present for all of their major life events.

Willis Grinstead is preceded in death by his parents, Clara and George, and his brothers, Raymond and Jack. He is survived by his wife Rose of Lenexa, KS; sister Norma Welker of Canton, MO; daughter Julie Murphy (Kevin) of Kansas City, MO; son Steven Grinstead (Leigh) of Denver, CO; his grandchildren Amanda Ochs (Lucas) of Quinter, KS, Lindsay Street (Nicholas) of St. Louis, MO, Joshua, Rachael, and Andrew Murphy of Kansas City, MO, and Seth and Emma Grinstead of Denver, CO; and his great-grandchildren Wyatt, Erin, and Addison Ochs of Quinter, KS.

In lieu of flowers or cards, please consider contributions to the Lakeview Village Foundation or Culver-Stockton College.

To order memorial trees or send flowers to the family in memory of Willis Grinstead, please visit our flower store.